AMG has created a handling pack for the C-Class Coupe, which is claimed to sharpen up the driving experience. Is this the junior C63? 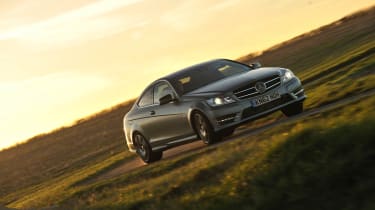 A new AMG version of the C-Class coupe, although we should warn you not to get too excited. For a start, this is basically a handling pack applied to the four-cylinder C250. And for a second, Mercedes has put ‘AMG’ into the title of every single C-Class coupe, from the basic C180 AMG Sport all the way to the C63 AMG Black Series.

This car’s official title is the C250 AMG Sport Plus with AMG Handling Package. Trips off the tongue, doesn’t it?

This is a mild reworking of the standard C250, although with more changes than the ‘handling pack’ title might lead you to believe. The suspension is firmed up with stiffer springs and dampers, plus some mild geometry changes to the front end. There’s also a new exhaust and a remapped ECU which, although it doesn’t add any more power, is claimed to sharpen throttle responses. The code for the seven-speed autobox has been similarly punched-up.

Despite the implicit promise of the ‘C250’ badge that you’ll find a creamy six under the bonnet, this Coupe’s engine has been downsized into an eco-tuned 1.8-litre turbocharged four-pot, with a relatively paltry 201bhp.

Let’s start with the good news. The chassis changes are pretty much entirely successful, giving keener front-end responses, better-feeling steering and a degree of throttle steerability that really does make this feel like a junior C63. Despite Merc’s worrying tendency to splash ‘AMG’ branding on pretty much anything, the C’s handling kit was created by the team at Affalterbach, and it shows.

The handling balance is pretty much spot-on, certainly on the slippery British tarmac we drove the car on. The rear tyres surrender their grip progressively under mild provocation, the half-way ‘ESP Sport’ setting allowing a bit of slip and still holding out the prospect of ultimate salvation if it all goes horribly wrong. Ride quality is good, too – there really aren’t any obvious downsides.

Now the bad news: the farty, breathless engine and perpetually confused gearbox. The raspy exhaust sounds more Japanese tuner than premium German. And, because the engine needs to be revved to deliver its modest best, you spend lots of time listening to its buzzy soundtrack. The turbocharged engine responds quickly enough, but it lacks pace – with acceleration further blunted by the autobox’s ceaseless hunting for the right gear. It almost feels like the transmission is waiting for a surge of power that never comes – kicking down, pausing, and then often kicking down again a second or two later when not much happens.

You can, of course, take charge of the gears yourself, but in manual mode the changes are slow enough to sap most enthusiasm.

Badly. The AMG handling pack is a relative bargain - £530, and a box well worth ticking on the basis of our experience. But the C250 itself looks anaemic when compared to rivals like the BMW 325i M-Sport Coupe, which is cheaper, more powerful and still comes with a six-cylinder soundtrack. Closer to home, the same AMG handling pack is available with the 250 CDI diesel engine, which offers near-identical power and the option of a manual gearbox.

In Germany this car is called the ‘C250 Engineered by AMG’, but Mercedes in the UK decided that name was too confusing – hence the even dafter title.