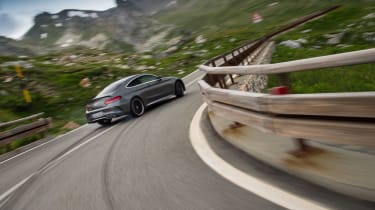 Mercedes-AMG has got much of the C63 absolutely spot on. With its monstrously powerful engine, abilty to oversteer at will and tough looks it loyally follows the modern AMG recipe. It combines this boisterous character with an elegant high-quality interior to make it a very desirable car.

It proves to be huge amounts of fun to drive, too. It’s sharper and more stable than the previous generation C63 and is properly involving. The downside to its engaging dynamics is a firm ride, but that doesn’t stop the AMG being a real hoot to drive.

We can’t help but lament the loss of the old C63’s 6.2-litre naturally aspirated engine; it was characterful, powerful and made a truly wonderful noise. The new four-litre twin-turbocharged V8, borrowed from the AMG GT, might not be quite as charming but its still got punch and aggression.

One of the biggest improvements over the old C63 is the gearbox. It’s actually the same even-speed MCT speedshift auto, but shift times and how quickly it reacts to driver inputs have been made much faster. It might not be able to rival the best dual-clutch units but it still really suits the C63.

> Read our review of the BMW M3

The C63 will never escape comparisons to BMW’s M3 and M4. But this latest generation gives the Munich cars more to worry about than ever before. The BMWs’ straight six simply can’t match the Merc’s roaring V8 for character. What’s more, the AMG is available as a Coupé, Saloon, Cabriolet and Estate, offering an even more practical alternative over the saloon-only M3.

Performance and 0-60 time > Stonkingly fast despite the hefty kerb weight – a facet that only becomes apparent under sustained heavy braking.

Engine and gearbox > 4-litre 'hot V' doesn't quite have the character of the old naturally-aspirated V8, but its performance is thunderous.

Ride and handling > A willing purveyor of oversteer, and LSD-equipped models are the best at obliging. Damper settings are imperfect for UK roads, however.

MPG and running costs > Hard to complain about the new car's economy, given the vast leap in (official) figures against the old car.

Interior and tech > A classier cabin than before, but floating non-touchscreen may irritate some.

Design > Proportions of the C63 Saloon aren't quite as neat as before, but the Estate and Coupé are more appealing. 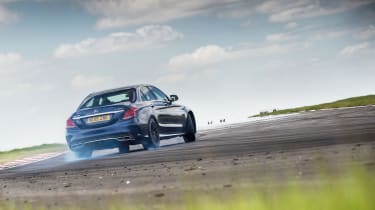 As mentioned above, the C63’s closest rivals are the BMW M3 and M4. The M3 just about nudges ahead of the C63 S Saloon thanks to its slightly sharper steering and feeling lighter on it feet than the Merc. The M3 also bettered the C63 on track, watch our video below.

However, when the C63 S Coupé went up against the M4 Competition, it was the AMG that came out on top. Its engine combined with the Coupé’s agility made it almost unbeatable on the Italian mountain passes we conducted the test on.

Back in the UK though, and the C63 S Coupé did battle with Alfa Romeo’s new Giulia Quadrifoglio in our car of the year test. The Scottish roads better suited the more pliant Alfa and it came sixth in the test, five places ahead of the C63.