The BMW 125i gets a turbocharged four-cylinder engine. Is it still worthy of the badge? 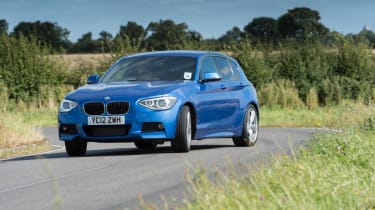 Don’t be fooled by the boot badge: this isn’t a 1-series with a creamy smooth six-cylinder engine under the bonnet of the sort the ‘25i’ branding would have led you to expect even a couple of years ago. Sorry, this is another turbocharged four, with the 125i getting the same 2-litre unit that’s fitted to BMW’s ‘20i’ and ‘28i’ badged cars, but in an intermediate 218bhp state of tune.

Meaning that, apart from the M135i, it’s the most powerful model in the current 1-series line up; this is also our first chance to sample the 1-series in M-Sport spec.

There’s not a huge amount more to say about the engine: this is the same four-cylinder turbo motor that’s already appeared in the 1-series, 3-series and Z4. Forced induction and eco-tuning mean that peak power arrives at a relatively lowly 5000rpm, but the chunky 228lb ft of torque is available all the way from 1350rpm – 4800rpm. Buyers can choose between a six-speed manual or BMW’s impressive new eight-speed automatic gearbox, with the slusher getting marginally better official economy figures – 44.1mpg against 42.8mpg.

Good, if not quite what you’re likely expecting. The engine is effective, if not the sort of powerplant that’s ever likely to set your pulse racing. BMW’s claimed 6.5-sec 0-62mph time sounds on the money, and the throttle response is clean and lag-free at anything above very low engine speeds. The soundtrack is disappointing, with a bland hum in place of the snarl you’d get from a proper ‘six.

Grip levels are high, and the pointy front end and obedient back axle mean that the 125i rarely feels rear-driven. Only on slow corners, or greasy surfaces, does it feel as if there’s any chance of the available torque overwhelming the back tyres. But overall there’s a nice, light, accurate feel to the way it drives – like a BMW hot hatch.

If you’re looking for a small rear-driver with decent urge and good running costs then the 125i covers plenty of bases. Although it’s less powerful, it slightly undercuts the Astra VXR and should also stack up well against the forthcoming mk7 Volkswagen Golf GTI.

We couldn’t match the official economy figures, but got 37mpg in real-world use.