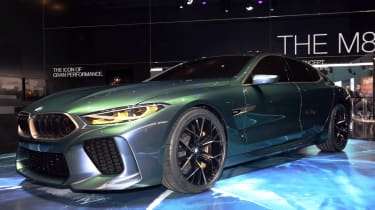 This is the new BMW M8 Gran Coupe concept. BMW might use the word ‘concept’, but apart from a few little details this is essentially the latest installment of the new 8 Series family, following on from the 8 Series Coupe concept shown last year.

This time around, BMW has chosen to show us an 8 Series in the guise of a fully fledged M variant, although there will of course be a range of lesser 8 Series Gran Coupes coming to market as well.

At over five metres in length the M8 Gran Coupe is a big car, with a roofline a little higher than that of the 8 Series Coupe, but the relatively low-line bonnet and the sloping roofline disguise its overall proportions, and every Gran Coupe gets the swollen arches at the rear that give the sides a ‘coke bottle’ effect. There’s an extra crease line in the side profile too, which BMW’s designers say give this car a more powerful aesthetic compared to the softer, more sensuous curves of the coupe version. The ‘duck tail’ spoiler integrated into the boot lid is another element standard across all Gran Coupe models, made possible thanks to the section being made from plastic. The four doors have frameless windows, and the ‘Hofmeister kink’ at the end of the side glass graphic is a milled part, not the usual extruded piece, enabling a more precisely detailed form. 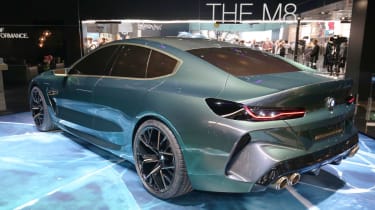 As for the elements specific to the M despartment version, these begin at the front end with the familiar three-intake M front bumper, and also include on this concept version yellow daytime running lights. Inspired by the yellow headlamps of the GTE-class M8 racer, BMW told evo the company is looking at bringing them into production as a key identifier of the M version. There are also wider front wheel arches to accommodate the bigger wheels and brakes you’d expect on an M car, plus the familiar CFRP roof and quad tail pipes at the rear. The wheels, too, are a new development for the M8, with the lighter surfaces the result of milling not painting and polishing, giving the wheels a diamond effect on the move as opposed to the usual rotating disc look.

Nothing has been confirmed by BMW at this stage as to the mechanical package underneath the M8 Gran Coupe’s sharp suit, nor any details of its interior, either, but expect the same powertrain as the new M5. That should mean a 4.4-litre twin turbo V8 with near enough 600bhp, an eight-speed automatic gearbox, and a four-wheel drive system that also allows the car to be rear-wheel drive only if the corresponding driver mode is selected. 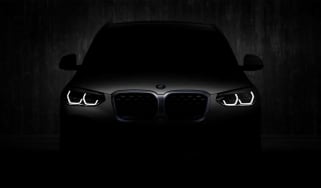