BMW’s long-awaited 8-series Coupe is finally upon us, and it’s here to shake up the GT class 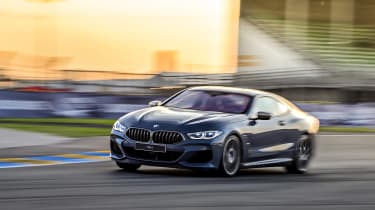 So, finally, this is the end product. BMW’s all-new 8-series has been slowly drip-fed through nearly all the possible mediums, previewed by multiple concept cars, pre-production prototypes, sketches, and even a GTE Pro WEC racing car. But here, in all its subtle blue-grey glory, is the new 8-series Coupe we’ll see on the road at the end of 2018, priced from £76,740 and topping out at £100,025 for the M850i in these images.

The new 8-series Coupe will be offered from launch in 840d and M850i forms; the former a straight-six diesel, the latter a 522bhp twin-turbo V8. We’ve already driven the M850i in pre-production trim, and can safely say that it feels as brisk as its power figure would suggest. It’ll reach 62mph in just 3.7sec, a time aided by the standard fitment of xDrive all-wheel drive, and an upgraded eight-speed automatic gearbox with an integrated launch-control function.

> Click here for our review of the M850i prototype

At just over £75k, the 840d will launch without many diesel GT coupes around to rival the entry-level model. The diesel is BMW’s ubiquitous 3-litre six-cylinder unit, and produces a slightly underwhelming 315bhp, but a stout 501lb ft of torque means it will still reach 62mph in 4.9sec. It’s not known yet whether BMW plans on offering its new quad-turbo straight-six diesel borrowed from the X5 M50d, but regardless, it should likely appeal to those planning on driving their 8-series up and down motorways and not Monza. The 840d is also fitted with xDrive all-wheel drive, which like in most other large BMW’s will run most of the time in rear-wheel drive, the front wheels only getting involved when the car senses slip.

Built from a cocktail of high-strength steel, aluminium and even a little bit of carbonfibre, the 8-series’ weight figure should still slip under the two-ton mark. To further aid handling, BMW has included a suite of new active chassis tech to keep the big coupe in check. This includes standard fitment of rear-wheel steering, or active integral steering as BMW calls it, as well as optional active roll stabilisation, to counteract excessive body movements whilst under hard cornering.

At 4843mm long, the new 8-series is by no means a compact coupe, but it’s over 180mm shorter than the Mercedes S-class coupe, yet sits 3mm wider and 70mm lower. As a result, the new 8-series has a more dynamic look than the Merc, positioning itself as a sportier type of GT. Rather than offer a standard model, and then an optional M Sport variant, all 8-series’ will get an aggressive exterior styling package, set off by 20-inch wheels.

The interior is all-new, and features plenty of switchgear and technology inclusions just released in the all-new X5. Fittingly, the new 8-series includes a standard 12.3-inch driver display, paired with a smaller 10.25-inch screen atop the dash. The overall design is subtle, and although it doesn’t look as sumptuous as those in the S-class or Bentley Continental GT, it does correlate to the new 8-series’ more dynamic ethos. 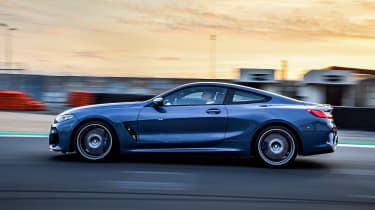 Placed right at the top of BMW’s contemporary model range, the new 8-series will not only rival the Mercedes S-class Coupe, though, as an upcoming V8 version of the Bentley Continental GT and even the Aston Martin DB11 V8 could be considered possible rivals. The key difference here is the option of a diesel engine, something that no large GT coupe rival offers, as well as its sub-six-figure price tag.

The coupe bodystyle is also due to get a couple of variations, as both convertible, and four-door Gran Coupe versions, will follow shortly after. An even more powerful M8 is also on the cards, doubtless incorporating the M5’s even more powerful 600bhp-odd V8 engine. Previewed by both the M8 GTE, which debuted at this year’s Le Mans 24h, and the M8 Gran Coupe concept revealed earlier this year at the Geneva motor show, the M8 will likely rival cars like the Mercedes-AMG S63, and form BMW M’s flagship model.

For now, though, we’re just glad to see the Coupe out in the open. We shouldn’t have to wait too long to see it on the road, either, as the new 8-series is on sale now at BMW showrooms, with cars reaching customers just before year’s end.