BMW’s original SUV has just received a full top-to-bottom makeover for 2018, here’s the full story on the new X5... 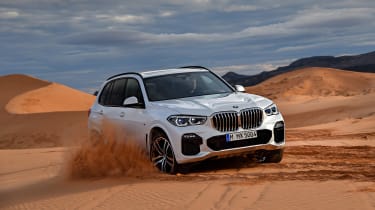 The X5 was BMW’s first SUV in a range that now covers six different models, with a seventh (the X7) due in a few months time. The X5, though, is where it all started, and this new fourth generation will need to be good to outpunch its talented suite of new rivals including the Porsche Cayenne, Audi Q7 and Range Rover Sport.

The body is 36mm longer, 66mm wider and 19mm taller than the outgoing model, and if you’re a fan of the BMW X3’s design, you’ll instantly like the X5, as it does little to push BMW’s current design language. The X5’s face is dominated by a large kidney grille, now conjoined in the middle, which will surely be seen in BMWs to come.

> Click here for more on the all-new Audi Q8

Despite physically being a bigger car than the X3, the X5’s increased wheelbase hides its extra bulk well enough to need a double take to make sure you’re looking at the right car. New to the X5 is a crisp beltline rising over the rear wheels and flowing into the wide rear lighting units. 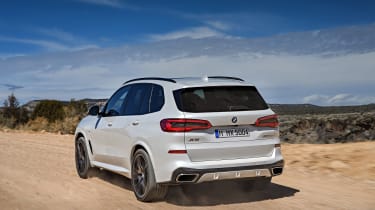 Wheel sizes are available between 18- and 22-inches, although the UK’s appetite for larger wheel and tyre combinations will likely affect UK specifications.

BMW has designed the new X5 on underpinnings derived from the latest BMW 5-series, throwing a bundle of new chassis hardware at the car. Based on BMW’s usual combination of double wishbone front suspension, with a five-link system at the rear, Adaptive damper control is now standard across the range, while an optional air suspension set-up is available too, improving ride quality further according to BMW.

Active roll stabilisation is also available, stiffening up, or slacking off the anti-roll bars to reduce lateral roll without affecting the ride quality. Rear-wheel steering is also available for the first time in an X5.

Powering the new X5 from launch will be three familiar 3-litre six-cylinder engines, one petrol and two diesel. The petrol, badged 40i will produce 335bhp, but despite the bad press, it’ll be the two diesels making up a majority of UK sales. The entry level 30d produces 261bhp, but it’s the headline grabbing M50d that we’re more interested in. Despite drinking from the black pump this flagship diesel model, has quoted figures of 394bhp with 506lb ft of torque available at just 2000rpm.

BMW has achieved these numbers by turbocharging the 3-litre diesel six with a total of four turbochargers, making this the only engine currently in series production to share its turbo count with a Bugatti Chiron. This same power unit is used in the M550d that’s offered in continental Europe, but has been forbidden fruit to big diesel fans in the UK, until now that is. Performance is suitably brisk for the M50d, hitting 62mph in 5.2 seconds. An X5 M will doubtless be coming too, packing the current M5’s V8 engine.

Like the rest of the car, the interior looks like a gentle evolution of the layout in other BMWs, but is actually a bigger step than first meets the eye. Core to this is BMW’s next generation iDrive system sat on a larger 12.3-inch display. A second 12.3-inch display also sits ahead of the driver, but unlike the similar set up in modern Merc’s the two screens sit in separate cowellings. A majority of the switchgear is also new, and will likely be rolled out on forthcoming BMW models like the 8-series Coupe.

All of this new tech should make the latest X5 a desirable package for SUV buyers, but we’ll be more interested in whether BMW’s core SUV will return to its place as the dynamic benchmark in the class.