It’s hard to believe Audi  only produced its first SUV back in 2005 with the original Q7, because the range has expanded rapidly since then.

You’re now looking at the latest addition, the Q8. It’s ostensibly a coupe-esque version of the Q7, and will rival BMW’s X6 and the Mercedes-Benz GLE Coupe when it hits UK roads in July.

> Click here to read our review of the new Audi A6

In common with Audi’s recent models, it’ll be primarily powered by a 3-litre V6 turbodiesel when it lands in the UK, putting 282bhp and 443lb ft to the road through a standard quattro all-wheel drive setup and an eight-speed tiptronic automatic transmission. 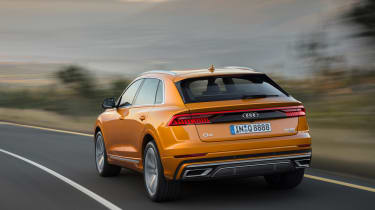 Badged Q8 50 TDI, the diesel will drag itself to 62mph in 6.3ec and top out at 144mph, though if you can wait a little longer Audi will release a 3.0-litre six cylinder petrol badged Q8 55, producing around 340bhp, 369lb ft of torque and sprinting from 0-62mph in 5.9 seconds. Another, less powerful, diesel model badged Q8 45 will also be released with around 230bhp, however we won’t see this model in the UK.

Mild-hybrid technology will also feature as standard, based around a 48V electrical system. The ability to regenerate energy under deceleration, as well as coasting off the throttle, should allow the substantial Q8 (it’s 4986mm long, and 27mm wider than the imposing Q7) to sip fuel a little less quickly than otherwise it might.

Some large alloy wheels help reduce the car’s visual bulk too, with 21in wheels as standard and sizes up to 22in optional, with a choice of suspension setups from conventional steel springs to regular and sport air suspension configurations. Audi will introduce the Q8 two trim levels at launch in the UK, standard S-Line and new top-tier Vorsprung. The latter will feature larger 22-inch wheels, titanium styling pack and a Bang & Olufsen sound system.

Audi Drive Select will allow drivers to adjust the behaviour of the adaptive versions, as well as altering steering response, and engine and gearbox behaviour. Like Audis from A6 to A8, four-wheel steering should help improve the Q8’s agility - though in our experience, neither Audi’s four-wheel steering nor air suspension options don’t deliver the best driving dynamics.

As well as sharper styling than the Q7 - there’s more than a hint of Lamborghini’s recent Urus to some elements, we reckon (though it’ll be built alongside the Q7, Porsche Cayenne and VW Touareg in Bratislava) - the Q8 also packs Audi’s latest technological features, from the option of up to 39 driver assistance functions, to an A8-style cabin punctuated by a pair of haptic touchscreens (10.1in and 8.6in) and a Virtual Cockpit instrument cluster. 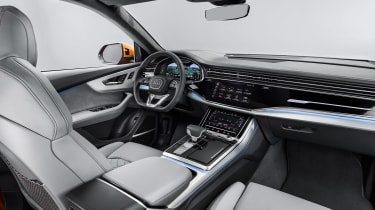 Interior options will be numerous, from three different types of leather on base models alone, to sports seats in the S Line package, and four- or five-seat configurations depending on rear seat requirements - ahead of a reasonably-sized 605-litre luggage area. Flip down the rear seats and that grows to 1755 litres, which means the sleeker roofline hasn’t come at the expense of practicality, and it also puts the Q8 ahead of the X6 and GLE Coupe in this measure.

Pricing hasn’t yet been confirmed, but it’s likely the range will start at around £65,000 for the 50 TDI version mentioned above when it goes on sale in the summer. And the range shouldn’t stop at the existing lineup - an SQ8 is likely, sharing the SQ7’s 4-litre turbocharged (and electric supercharged) diesel V8, while an RS Q8 is on the horizon too.