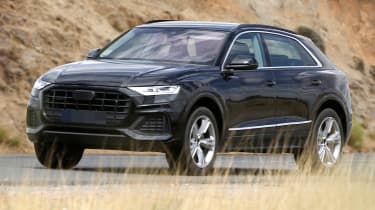 Audi hasn't yet filled the Q7 coupe niche in production form, but this year's Geneva motor show marks the debut of the second such vehicle in concept, with the debut of the Audi Q8 sport concept.

Based on the Q8 concept first revealed at the Detroit auto show earlier in the year, the Q8 sport concept is a different - more sporty, as you might expect - take on the same essential form as the Detroit concept.

You won't find any sheet metal changes as a result, and even some of the details, such as the front and rear light units, appear identical between each concept. It's still a shade over five metres long, for instance, and over two metres wide.

You do get a new lick of paint however - a suitably retina-scorching shade of orange, rather than cool blue - and subtly different use of colour has traded some sophistication for RS-style aggression. Audi's 'singleframe' grille design has changed trading prominent vertical bars and horizontal slats for a honeycomb design, and is framed by a darker surround than the mid grey of the first concept.

Larger air inlets in the bumper echo similar changes seen in the latest Audi RS5, also launched at Geneva, which are set to become an RS staple. Other changes to the first concept include wider wheel housings (by just 12mm), and set into the rear diffuser element are large oval tailpipes, where the first car's exhaust outlets were more seamlessy integrated. 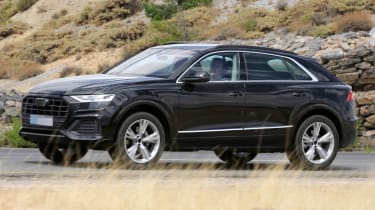 In the engine room, little again has changed. A 3-litre V6 takes centre stage, boosted not only two conventional turbochargers and an electric compressor but also a "mild hybrid" setup, which positions an electric motor between the engine and transmission to assist, regenerate and start and stop the engine.

It's not quite as revolutionary as Audi claims - an electric compressor is already used in the production Audi SQ7, while Honda introduced integrated starter generator systems to production cars in the late 1990s - but the combination would be effective from a performance perspective.

The setup, partly supplied by a 0.9kWh lithium-ion battery does allow the Q8 sport concept to be driven at low speeds on electric power alone. Not quite enough to match existing plug-in hybrids, but Audi does claim the mild hybrid setup reduces consumption by 1 litre of fuel every 100km. 'Eight cylinder performance with the consumption of a four-cylinder', is the slightly optimistic official line.

The concept sits on sport-tuned adaptive air suspension and sends its power to all four wheels, as per the quattro norm, while ceramic brake discs are employed to haul down what is likely to be a fairly hefty car.

Audi says the Q8 sport concept demonstrates the potential for a future Q8 model range. Interpret that to mean that a production Q8 is definitely on the way, though its drivetrains may well be even less revolutionary than that of the concept.