Lamborghini Urus review – is this the first super-SUV?

Trying to master so many disciplines in one car is a tough gig, but the Lamborghini Urus makes a reasonable fist of it 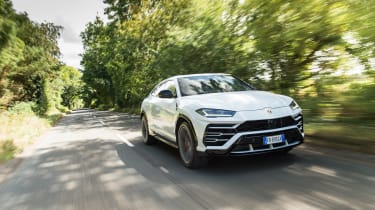 The Lamborghini Miura is often credited as being the world’s first supercar. Now the firm has created the Lamborghini Urus, in its own words, the world’s first super-SUV. That's a term destined to infuriate traditionalists as much as it will excite both existing customers of the firm asking for a practical Lambo to add to their stable, and new customers looking for the boldest, brashest, fastest SUV on the market. Whatever your standpoint, the question surely is whether there’s enough Sant’Agata in the recipe to make this a proper Lamborghini, regardless of size, weight and the number of seats.

While it’s easy to drift off into imagining an Aventador V12-powered SUV in the spirit of the outrageous LM002 of the 1980s, the Urus is far more pragmatic in its approach. Based on the VW Group MLB-evo platform that also underpins the current Audi Q7 and Porsche Cayenne, it’s powered by the now ubiquitous combo of a 4-litre twin-turbo V8 with an eight-speed auto ‘box, the V8 here being in a particularly potent state of tune. The engine has been developed by Lamborghini to produce 641bhp and 627lb ft of torque, thanks to new turbos, cams and cylinder heads amongst other items, which is enough to blast the 2.2-ton Urus to 62mph from rest in just 3.6 seconds. The top speed is also fairly spectacular for an SUV, the Urus topping out at 189mph.

It’s platform sharing that makes a car like this possible for a relatively small company such as Lamborghini, just as it inevitably makes the Urus’s constituent parts relentlessly predictable. Nevertheless, the magic, Lamborghini hopes, is in the way the oily bits are used, and how they’ve been developed and calibrated. 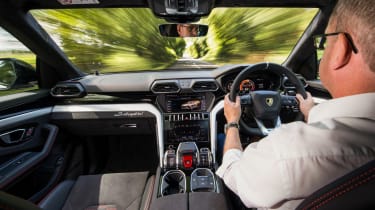 As the firm’s head of R&D, Maurizio Reggiani, points out, Lamborghini gets to cherry-pick what it wants from the VW Group inventory, and to achieve its aims – best performance of all; within the top group for comfort and off-road ability, apparently – it has thrown everything it can at the Urus. In practise this means not only the extra-strong tune of V8, but rear-wheel steering, active anti-roll bars, torque vectoring on the rear differential to go with a centre Torsen diff (unlike the hang-on centre clutch of the Cayenne, for example) and ceramic brakes. You’ll recognise many of those systems from related cars, but none has all of them in this configuration.

The torque split from the centre diff is 40:60 front:rear in normal driving, with up to 70 per cent able to be sent to the front axle or 87 per cent to the rear. Lamborghini says it chose the Torsen differential because of its reliability and lack of inertia, while the rear diff can distribute up to 75 per cent of the torque it is receiving to one side. Wheel sizes range from 21 to 23 inches, with gargantuan 440mm carbon-ceramic discs behind them. A broad choice of Pirelli rubber is offered, from Corsas all the way through to dedicated off-road tyres.

The air suspension offers up to three different ride heights, and there are also three settings each for the steering, powertrain and damping. All of this, including the rear-wheel steering – which offers +/- 3 degrees of movement and gives the effect of shortening the Urus’s long three-metre wheelbase by up to 600mm – is controlled by the Tamburo, a collection of stylised levers and switches at the base of the centre console. There’s Strada, Sport and Corsa modes, plus Neve (snow), with the further options of Terra (gravel) and Sabbia (sand). Or you can flick the EGO switch for quick access to your preferred mix of steering, powertrain and damping. Sounds complicated, but in practise you soon settle on a combination that works for most roads.

The Urus is a big car – longer and wider than a Cayenne, though not as tall – but once inside, the driving position is notably low-set. It’s spot-on, too, in terms of steering-wheel reach and pedal position, while the fact the top of the door sill is level with your shoulder gives a real feeling of security as well as sportiness. The downside is that it’s hard to sense the extremities of the car, and once out on the road the Urus does feel like a big beast on country roads. Rear-seat room is really generous, unless you’re well over six feet tall, and the boot is a decent size, too.

It seems hard to believe the cabin is made by the same people that make the Aventador. Perhaps that’s a little unfair on the old supercar hero, but the Urus utilises its leather and Alcantara well, with a broad centre stack housing the latest VW Group touchscreen. Just as in the supercars, you have to flick up a missile launcher-style cover to start the engine.

You soon discover the Urus is one of those cars that feels even more powerful than the numbers suggest. Throttle response is sharp, particularly once you’ve advanced up from Strada mode, and it piles on speed with almost comedic keenness. The V8 is present but relatively subdued in normal driving, but in Sport and Corsa there’s a boisterous blare and crackle on the overrun as accompaniment; sturdy paddles behind the wheel allow you to shift gears manually. The steering is light but very accurate, and as changing its setting alters the effect of the rear-wheel steering, you rarely need to use more than a flick of the wrists to take a curve. 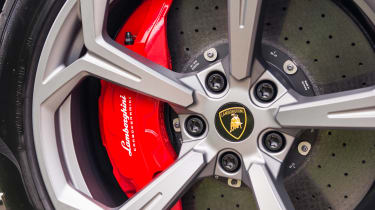 Our car for the road route features 23-inch rims with a P Zero tyre, and the crumbling roads around the Vallelunga circuit soon expose the Urus’s weakness, at least in this spec. On smooth tarmac it glides along nicely, but as soon as the surface is broken, the ride deteriorates, with plenty of noise from the suspension as the air springs fail to deal adequately with the workload being asked of them.

Driving a Urus on the road fitted with the smaller 22-inch wheels reveals a marked improvement when it comes to the suspension dealing with poor surfaces. It has not transformed into a Mercedes S-Class, but it’s certainly more composed and settled than examples fitted with the larger wheel and tyre combination. The suspension is still quite busy and where a rival, such as Cayenne Turbo settles comfortably on its air suspension whether it’s asked to jog along at a cruise or sprint for the finish line, the Urus constantly feels on edge, like coiled spring ready to make a break for freedom. 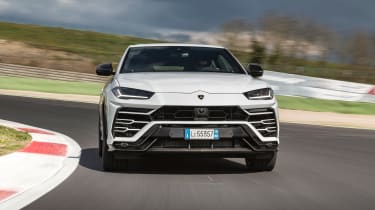 On track the Urus (we’ve only tried a car with 22-inch wheels and fitted with a Pirelli Corsa tyre) is a freak, storming down the straights and able, at least for small numbers of laps at a time, to brake late into corners. There’s more agility here than seems ought to be possible, and if you were so inclined to take a Urus on a trackday you’d surely embarrass many a hot hatch or sports saloon. It’s all about weight management, though: not overloading the outer front tyre on turn-in, and keeping it smooth. A one-dimensional experience, perhaps, as you might expect.

Finally, the off-road track turns out to be more gravel rallycross circuit than rock climbing or water wading, but then very few owners will take their Urus green-laning.

You’ll pay around £165,000 for a Urus, but most will probably end up at £180,000 after options, of which there are many. That’s a lot more than Porsche’s Cayenne Turbo, but thankfully for Lamborghini, the Urus has a lot more performance on tap. Bentley’s Bentayga is another group rival, although it attempts, at least, to offer more traditional luxury with its brawn. 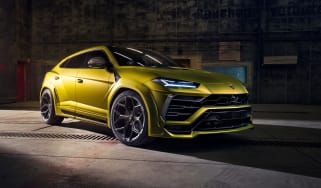 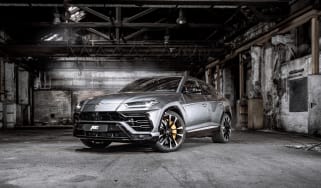 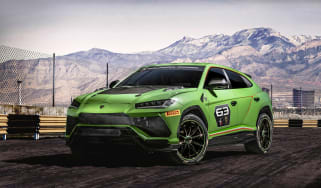 It’s not just a concept, but a preview of Lambo’s next one-make racer, set to debut in 2020
Skip to HeaderSkip to Content