The new 8-series Gran Coupe adds more doors to the formula, but adding a bit of key practicality to the range 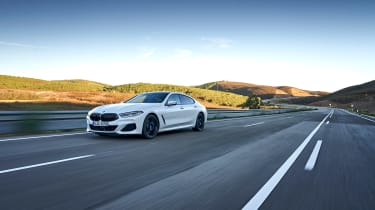 Gran Coupe is slightly confusing BMW nomenclature for four-door, four-seat versions of its regular two-door coupes. We’ve seen it before on the 4-series, and also the 6-series that this new 8-series Gran Coupe replaces.

BMW says it’s the only model in its segment derived directly from a two-door sports car – a sly dig at the E-class-based AMG GT 4-door, perhaps – but as the 8-series’ credentials as a “sports car” are by no means clear, we’ll take that one with a hefty pinch of salt.

There’s no doubting it’s distinctive though, and here in entry-level 840i form and rear-wheel drive, it packs the same powertrain as the BMW Z4 – or, if you like, the Toyota Supra. We already know that’s a potent combination, but how does it fare in the heavier, comfier 8-series Gran Coupe?

It’s traditional BMW fare here: A three-litre inline six up front, and drive to the rear wheels alone. Okay, so the ‘six is turbocharged, and an eight-speed ZF automatic gearbox means the 840i is hardly an E36 M3, but with 335bhp at its disposal and a usefully lighter kerb weight than xDrive models (1800kg, a saving of 55kg over the 840i xDrive and 195kg less than the M850i xDrive) it’s off to a good start. 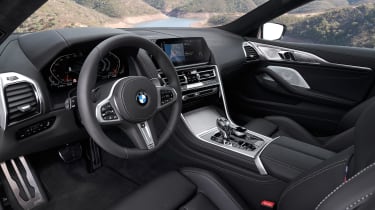 Forward of the A-pillar the Gran Coupe’s setup is identical to that of the Coupe, but the windscreen frame itself is more upright than on the two-door car, facilitating extra interior room. The rear window is steeply raked, limiting headroom for anyone over around 6’4” if colleagues on the launch are any indication, and the layout is strictly two individual seats with a large centre console dividing legroom. The boot is a proper saloon-car style job – better for chassis rigidity than an A7-style hatchback, albeit considerably less practical. Adaptive suspension is fitted as standard.

Any fresh vibe our satin-white 840i Gran Coupe test car might have had was undermined somewhat by a coal hole of a cabin that really doesn’t do justice to what’s otherwise a thoroughly pleasant driving environment. The layout is quite traditional by recent BMW standards, with a centre console angled towards the driver (topped by a wide infotainment display) and the driving position is spot-on, feeling lower than in say, a 5-series.

The crystal gear selector is an acquired taste, and its chiselled facets can feel a little unusual in the hand, while the contra-rotating virtual needles of the digital gauge cluster are fussy, but with a head-up display you barely need to look at them anyway, so you can literally overlook it.

And don’t BMWs just feel right with six-cylinder engines? From the moment you fire up the 3-litre, it feels ideal for the car. It’s smooth and restrained lower down the rev range, but it responds to the smallest flexes of your ankle and takes on a strident tone towards the top end – if lower in pitch in this modern turbocharged form compared to BMW sixes of old. 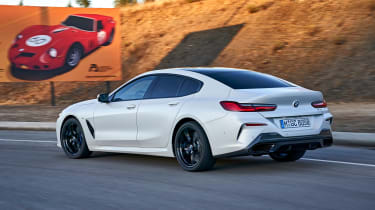 But even with 1.8 tons to push along, this engine’s game. There’s no thump in the back, no white-knuckle acceleration, just keen performance, appropriate for the car, and whether left in auto to do its own thing (ideally in Sport mode) or taking charge via the paddles, you never feel short-changed. It’s not Supra or Z4-fast, but it’s still plenty.

We did notice some unusual driveline shunt when backing off the power, making smooth deceleration a little tricky, but once you’re on the brakes all is fine again – they’re powerful and easy to modulate. More so than the 8’s electronics would have you believe, anyway – the sooner you switch the panicked beeping and over-eager lane-keep assistance off, the better.

This would all be for naught if the 8 GC’s chassis wasn’t up to snuff, but there’s more good news here. It often feels like a smaller car than its 5-meter profile suggests – there’s an agility and balance that wouldn’t feel out of place in a 3-series. BMW’s steering is on the right track for improvement too, with less of the gloopiness than we’ve found in many M products, so squidgy, overly-thick steering wheel rim aside, you get a fairly good idea of what the front tyres are doing.

Generally, they’re gripping, and fairly hard at that, though the weight takes over eventually and if you’re a little too keen on the throttle the GC is more likely to wash gently wide than push the tail out. It does handle bumps well though. The structure feels stiff, and only over particularly uneven surfaces did its composure waver, even in Sport, as the dampers tried to contain the car’s weight.

Ultimately you’d still have more fun in something smaller, lighter and more pointy, but in six-cylinder, rear-wheel drive form, the 8-series Gran Coupe strikes a well-judged balance between driver engagement and GT-like comfort. 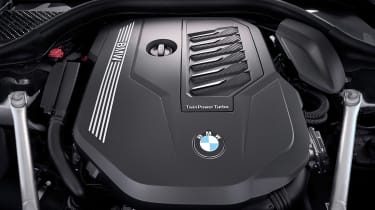 With an M8 Gran Coupe also on the way it’s hard to imagine why you might spend almost a hundred grand for the M850i, particularly when the 840i already performs well. You’re more likely to be tempted out of a BMW entirely – into Audi’s new S7 Sportback TDI for instance, at around £68,000, or the smooth operator that is Mercedes-AMG’s CLS 53 4Matic – hybrid assistance, seven tenths quicker to 62mph than the 840i GC, and priced within a few choice options at £74,565.

What’s great is that all the cars here go about things in a slightly different way. The Mercedes has a fluid, sophisticated feel with a great cabin and smooth powertrain. The Audi’s diesel delivers effortless performance and its four-wheel steering gives it great agility, while the BMW is perhaps the most traditional driver’s car of the group.