2019 BMW M8 Competition review - has BMW beaten Aston Martin at its own game?

BMW M's biggest and most expensive coupe has Aston Martin in its sights, but does the M8 pull it off? 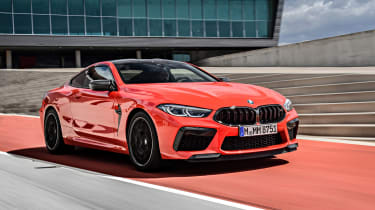 Instant messaging shorthand will forever render BMW’s latest performance flagship the BMW ‘Mate’, but its abilities on the road decide whether it will endure as the kind of car that will live on in evo in the years to come.

On recent form, that’s in no way guaranteed. M division has made some very capable cars over the last few years, but less frequently have they been the dominant class leaders of yore. It took some massaging for the M3/M4 to become the car it should have been from the start, as revealed in Competition Package form, and the M2 only showed its best side as the M2 Competition.

Tellingly, the M8 drops to market badged M8 Competition right from the off (in the UK, at least), which makes you wonder whether the M badge is enough on its own these days. If ‘M’ isn’t inherently analogous with competition already, then how deserving of the badge are the cars, like the M8, that currently wear it?

While the M8 shares its powertrain with the BMW M5, it is, in Competition form at least, the most powerful engine ever developed for an M division car. The 4.4-litre unit, twin-turbocharged, makes 617bhp at 6000rpm, with a 553lb ft torque peak spread all the way from 1800 to 5800rpm.

An eight-speed automatic transmission is standard equipment, as is xDrive all-wheel drive, which naturally is rear-biased and features clever electronics to apportion torque to the correct wheels. The behaviour can be adjusted depending on the mode selected and, like the current M5, can send power to the rear wheels alone should you have a particular disdain for either rubber or your wallet. 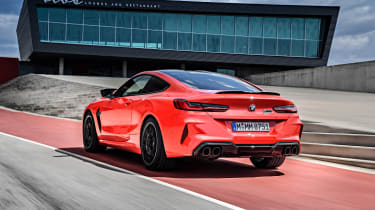 Chassis tuning is specific to the M8, so despite similarities in size and weight, the M8 should have different driving characteristics to the M5. It’s certainly not small, stretching to 4867mm in length and 1907mm wide, marginally shorter and wider than the M5, with an 1960kg kerb weight.

There’s a baffling range of adjustment of the car’s parameters on offer, from the standard Efficient, Sport and Sport Plus engine settings and Comfort, Sport and Sport Plus damper modes, to 4WD, 4WD Sport and 2WD drivetrain configurations. New is BMW’s ‘integrated braking system’, which uses an electronic actuator for the brake booster rather than a vacuum booster, and can therefore respond differently on command – Comfort and Sport settings give either softer, more road-suitable response or a quicker response for fast driving.

BMW has laid on both track and road driving for the M8’s debut. On track the M8 behaves much as you’d expect of a car that’s both highly developed and powerful, but also 1960kg at the kerb – fast, precise and well balanced, but not as agile as something perhaps a touch lighter.

The weight certainly takes the edge off what’s clearly a very rapid machine, but under braking and during the initial turn-in phase you need to take just a little more time to ensure everything hooks up. Under power it’s much better, feeling rear-biased but hooking up hard with all four wheels whenever the rear tyres get a little too carried away.

One surprise is the gearbox. You can change with the paddles – swift, if not as sharp as a dual-clutch ‘box – but even left in auto the electronics are clever enough to almost always give you the right gear at the right time. Few will take their M8s on track, but it’s about as friendly and undemanding as track-driving gets. 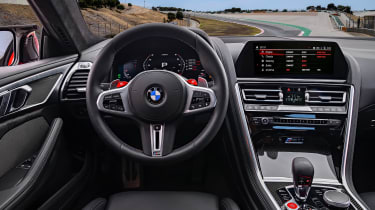 We switch to a convertible for the road section, and despite weighing even more – a groaning 2010kg – you’d be hard pressed to notice any real difference. It’s admirably rigid for a start, rides with a calmness that’s more 7-series than high-octane sports car, and feels no slower in a straight line.

Perhaps that’s helped in part by having a little more access to the M8’s exhaust note, which is otherwise a disappointment. The characterless blare sounds more like a particularly gruff four-cylinder than a V8, and with most of the M8’s thrust available in its mid-range, there’s little compulsion to rev it to the red line.

The chassis still shines, though, feeling deft and agile, and with better steering weight than many recent M products. It’s fluid through the twisties and rapid down the straights, and only the sharpest left-right flicks and lumpiest sections of road betray the M8’s weight through excess body movements.

But we’d driven to the track in BMW’s new 840i Gran Coupe. Its 335bhp straight-six felt if anything even more responsive than the V8, if not as potent, was considerably easier on the ears, and its chassis felt no less direct. I’m sure it wouldn’t have fared quite as well on track, yet at £69,340 it’s little more than half the price of the M8 Competition and drives nearly as well on the road. The M8 makes a fine grand tourer, but even in Competition form it’s not quite the sports car the name suggests.

True like-for-like rivals are few and far between – the £120k-130k, 600bhp, four-seat coupe and convertible market is a small one. Neither Mercedes nor Audi has something directly comparable, so closest is probably Porsche, whose 911 Carrera S and Carrera S Cabriolet just about seat four and get within a few whiskers in performance terms. 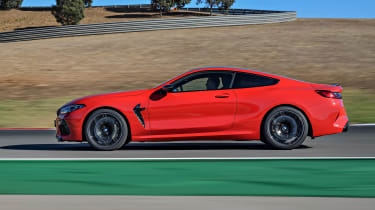 Ditch a couple of seats and you might be tempted by the Aston Martin V8 Vantage. At £120,900 it’s similarly priced, accelerates at a similar rate, and looks and sounds considerably better than the BMW, the latter thanks to its Mercedes-sourced V8. And if we’re including two-seaters, then Merc’s own AMG GT is worth consideration – they start at £104,195, but the GT C has more comparable performance at £132,695.

BMW has another GT in its range, of course: the i8. The supercar-like styling hides a chassis with less grip and less performance than the M8, but the coupe has a 2+2 configuration, looks fabulous, and won’t just cost less to run but is also less to buy – £114,935 for the coupe and £126,935 for the two-seat i8 Roadster.