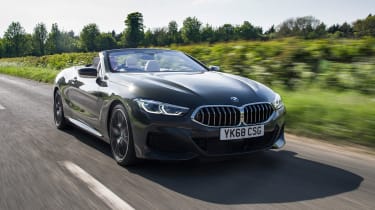 It’s not that many years ago that the idea of a diesel soft-top was a complete anathema to most manufacturers, but BMW arguably started the genre when it slotted the 3-litre diesel mill into the facelifted E46 and created a popular, sporting yet frugal, diesel convertible.

Since then, several manufacturers have had a stab at the genre, but with the 840d xDrive Convertible BMW has maintained its reputation for exploring and filling niches you didn’t really know existed. No one else offers this type of car with a diesel engine, but should you take the plunge?

If your pockets are considerably deeper – to the tune of almost £24,000 – then you could opt for the M850i xDrive Convertible. It’s considerably quicker than the diesel and has a tuneful 523bhp twin-turbo V8, but it’s not expected to be a big seller and is predicted to account for just 10 per cent of sales. An 840i with rear-wheel drive will debut later this summer and is expected to garner up to 50 per cent of all orders, perhaps thanks to a price tag that will be around £6000 less than the 840d’s £83,295. 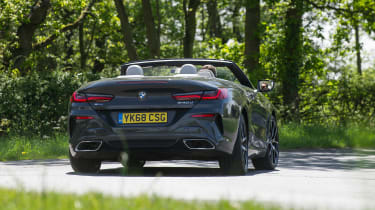 For the time being though it’s the 840d xDrive that will be the most popular offering and it utilises the familiar 3-litre straight-six TwinPower (BMW speak for twin-scroll) turbodiesel that develops 316bhp and 516lb ft of torque. That’s enough for a 5.2sec 0-62mph time and alimited top speed of 155mph. Economy is a strong point, returning between 38.7 and 39.8mpg according to the new WLTP test cycle, although if you dip into its performance envelope on a regular basis expect to see less than that.

On the move it offers an impressive amount of shove, while the ubiquitous ZF eight-speed auto makes good use of the torque, keeping it firmly in the sweet spot unless you’re brutal with the throttle. It’s relatively tuneful for a diesel too, virtually whisper-quiet when on agentle cruise yet exhibiting a surprisingly melodic gravelly bellow when extended. No, it’ll never match the M850i’s ripsnorting V8, but for a diesel it’s not too bad at all.

Under the 8-series’ svelte and stylish or over-detailed and fussy body, depending on your persuasion, are a host of systems designed to get the most from this nigh-on two-ton convertible. The suspension’s basic architecture is double wishbones up front with a multi-link arrangement at the rear, and as standard it comes with BMW’s adaptive dampers. Another inclusion is BMW’s Integral Active Steering set-up which brings some rear-wheel steering to the car’s make-up to improve agility. 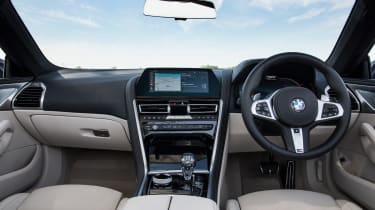 An option not available to 840d buyers is the awkwardly named Adaptive M Suspension Professional that can be added to the M850i xDrive. This adds active anti-roll bars aimed at endowing it with improved comfort when cruising and less body roll when driven in a moreenthusiastic manner.

Inside there’s a host of BMW’s latest technology, including Live Cockpit Professional which brings digital instrumentation, the latest version of iDrive and the ability to talk to your car by uttering the phrase ‘Hey BMW’. There are a host of gadgets and toys to keep you amused,along with more practical convertible considerations such as heated seats and an air collar which blows warm air around your neck for those cold, hood-down winter mornings. Heated armrests are available as an option.

Perhaps the first thing you notice when stepping into the cockpit is that the driving position is nice and low which gives it a sporting ambiance. Fixtures and fittings are top notch and there’s some nice detailing such as the stitched leather dash. Less successful is the £575CraftedClarity option which adds a glass gear selector and iDrive controller – it looks more like something your nan would have in a display cabinet from the 1970s with the digit 8 from a Casio digital watch embedded into the gearknob. Classy.

Avoid this option though and the 840d xDrive has the sort of cabin that makes you want to get in and drive, and drive a long way. Don’t expect to do it four-up though as the rear seats are laughably small. However, it’s perfectly suited to long jaunts, with a level of comfort andrefinement befitting a long-legged GT. Fast A-roads are its natural habitat, with a pliant ride and a lack of wind noise, even with the roof off. It effortlessly takes everything in its stride. 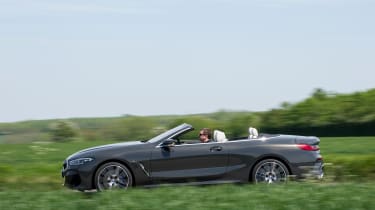 Move onto more challenging roads and the 840d xDrive continues to impress, if not entertain. Bearing in mind it has nigh on two tons to haul and keep in check it feels remarkably poised when in Sport mode, with the active steering giving it an unexpected agility in lower-speedcorners. Sadly, the lightweight steering is pretty much devoid of feel and the grip from the all-wheel-drive set-up is so prodigious that you never have a feeling for what the chassis is doing. The brakes – 374mm front discs clamped by four-piston calipers – are up to the job, but again there’s little feel through the pedal, making modulating retardation more of an issue than it should be.

Ultimately it’s suitably rapid on B-roads, but it’s still a big car and never feels particularly wieldy or entertaining to drive quickly in this environment. Treat it more as a luxury GT and it’s an impressive machine.

By slotting the diesel six-cylinder into the 8-series Convertible BMW has more or less carved itself a unique niche. A Mercedes S-class Convertible is only available in S560 or AMG versions, with prices starting at nigh on £120k. Porsche’s 911 Carrera S Cabriolet does offer considerably more driver-focused experience but arguably doesn’t do the luxury GT side of the 8-series’ character nearly as effectively.