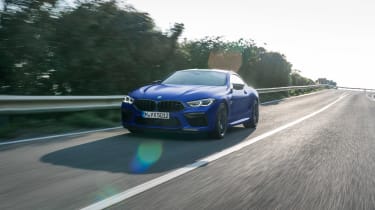 BMW has finally revealed the M8 Competition – a new performance flagship topping both the 8-series and M division ranges. It also signals the revival of a name that was so nearly brought to life in the early ’90s on a car that paired a naturally aspirated V12 engine (but not the one fitted to the McLaren F1) to the svelte E31-generation 8-series. Unfortunately it never was to be realised in production form, but BMW has now finally brought the moniker to market, on a car with the most powerful engine ever produced in Munich.

That engine is the same 4.4-litre twin-turbocharged V8 fitted to the BMW M5 Competition. Peak power is rated at 616bhp, with peak torque at 531lb ft. It’s sent to a rear-biased all-wheel-drive system via an eight-speed Steptronic torque-converter automatic transmission. That power, in combination with a sophisticated launch control system, helps the M8 achieve its impressive acceleration figures, reaching 62mph in just 3.2sec, and 124mph in 10.6sec. The M8’s top speed is limited to 155mph, but specify the M Driver’s Package and this will be lifted to 189mph, for ultimate autobahn supremacy.

The M8’s chassis is familiar, running on BMW’s widely used CLAR platform. With many shared components from lesser BMW models, the M8’s underlying layout isn’t particularly exotic, combining a multi-link rear axle and MacPherson struts at the front. BMW has not revealed official weight figures, but using equivalent BMW 8-series models in comparison to a 5-series as a guide, we can approximate that the M8 Coupe will weigh in at somewhere around 1950kg.

As with the M5 Competition package, the all-wheel-drive system has the ability to decouple its front axle to make the M8 purely rear-wheel drive. Aside from keeping the purists happy, this extended ability to vaporise the rear tyres will also add a further layer of driver focus to the package. A bespoke M Sport suspension set-up with adaptive dampers is also standard, with no air springs or magnetorheological dampers available. BMW has also fitted stiffer engine mounts and dialled in more camber to the front axle, sharpening steering response and increasing grip levels from the front tyres.

New for the M8 is a clever integrated braking system, which controls the usual hydro-mechanical braking elements through a single electronically controlled module. The system not only reduces weight, but also allows designers to essentially engineer ‘feel’ into the brake pedal – think of it as throttle-by-wire, but with brakes. This system works in conjunction with both the standard steel and optional carbon-ceramic brakes, the latter of which further reduce unsprung weight. The new braking system has even been tailored to offer two distinct braking feedback options, configurable within the M8 Competition’s M drive modes.

Overall, the M8 is a mere 5mm wider than a standard 8-series Coupe, sharing its underlying body-in-white, but, like the M5 Competition, has flared front wings to cover the wider front tyres and improve the M8’s stance. The M8 is otherwise familiar, with added use of carbon trim on the nose and tail, but with a more open front aperture feeding that air-hungry V8 and its multiple radiators. At the rear are (real) quad exhaust pipes and a narrow carbon lip spoiler. The interior combines a combination of elements from the M5 such as its seats, steering wheel and the 8-series’ rudimentary dash, albeit spruced up with plenty of ornate stitching and laser-cut speaker grilles.

The M8 will be on sale in the UK later this year with prices starting at £123,435 for the Coupe, and £130,435 for the Convertible. A four-door Gran Coupe version will soon follow, with the standard 8-series Gran Coupe to be revealed in a couple of weeks’ time. But it’s that price point which may well be the M8’s biggest hurdle. After all, despite the M8’s £25k to £32k premium over an M5 Competition, it ostensibly remains a similar car, with very similar performance capabilities. The M8’s price also puts it close to more substantial names such as Bentley and Aston Martin, both of which offer similarly sized V8 versions of the Continental GT and DB11 for not a lot more money. As an expression of BMW M’s ultimate capability, the M8 Competition certainly appeals, but whether it will appeal to the same buyers used to seeing a more prestigious badge on the steering wheel in front of them remains to be seen. 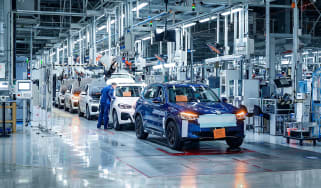