The Jaguar XJR is more focused than the XJ Supersport, with the same 542bhp V8 as the new F-type R Coupe 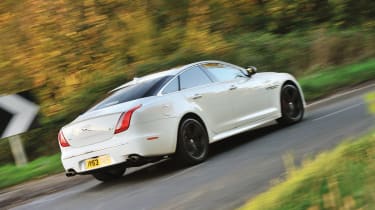 The new Jaguar XJR. It was a staple nameplate on fast Jag saloons throughout the late 1990s and early 2000s, but hasn’t been put to use since the bold, new-age XJ landed in 2009. But with a new Mercedes S63 AMG to battle, the XJR is back, and priced at £92,370, a comparative bargain. These things are all relative, though…

Jaguar already makes a fast XJ – the 503bhp Supersport, which uses the same supercharged 5-litre V8 engine as the XFR and XKR. The XJR messes up the opportunity for some near badge alignment by heading for the 542bhp version of that engine found in the XFR-S, XKR-S and now the F-type R Coupe. In the 1.8-ton XJR it yields a 4.7sec 0-60 time while the top speed is electronically limited at 174mph.

The engine powers the rear wheels via an eight-speed ZF automatic gearbox – the same one winning praise in the F-type as well as plenty of other cars, including the BMW M135i – and it boasts corner recognition technology, adapting its shifts depending on the stretch of road that lies ahead.

Both the stability control and differential get a sportier calibration, while an adaptive electronic suspension monitors driving conditions with the ability to adjust the damping up to 500 times per second. A tweaked steering rack is shared with the F-type.

There’s no escaping the XJR’s size and weight, but it does a very good job of suppressing their effect on its agility and builds successfully on the deft dynamics of the XJ Supersport. The ride quality is perhaps a patch too firm for it to be properly classed as a limo (as is its short-wheelbase-only body style), and there are certainly more cossetting options out there for back-seat passengers. But the XJR is inevitably a more driver focused choice, and its firm-edged (though still controlled) ride provides it with a sharpness that should satisfy most performance car fans. The steering is a big improvement over the Supersport; it’s still ultimately feelless, but it’s traded confidence-sapping low-speed lightness for a weightier rack that is more in tune with the size of the car it operates.

The engine continues to be a cracker, with more character than many turbocharged units, and it endows the XJR with a frankly startling turn of pace, especially when roads are dry and it’s able to fully transfer its stonking power to the road. The soundtrack is mostly muted, with a lovely V8 warble under heavy throttle but less blood and thunder than Jag’s exceedingly vocal sports cars. And more so than ever, there’s plentiful power to overwhelm the rear wheels; the rear will happily carve an angle wider than the front with little provocation.

The gearbox deserves the praise heaped upon it elsewhere. It’s slick and refined enough in its automatic D mode, usefully more awake if you switch it to S during faster driving, and engaging enough in manual mode to ensure more enthusiastic journeys will be spent punching between its well-spaced gears. If eight sounds too many ratios to be intuitive, you need to try the car. The only confusion can come when manually changing down from eighth to third into a roundabout.

Considering how relatively silly big petrol saloons like this may seem in the age of premium diesels, there are plenty of cars this XJR fights: the aforementioned Merc, as well as the Porsche Panamera GTS, Maserati Quattroporte GTS, BMW M6 Gran Coupe and Audi RS7 Sportback. The Jag is one of the most fun to drive, but in this class, brand allegiance alone can be everything to some buyers.

If the XJR doesn’t shout loud enough about its lairiness for you, the Jaguar XFR-S uses similar mechanicals in a tauter package with the option of a big rear wing. Read our Jag XFR-S review here.