The RS7 is the closest thing that we'll get to a saloon version of the new RS6 Avant. It's less practical and more expensive - so is it worth the extra? 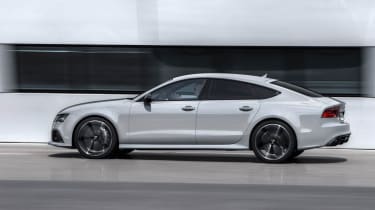 The Audi RS6 Avant’s almost-saloon sister, and the closest thing we’ll get to a four-door RS6. The RS7 shares its estate sister’s mechanical components, meaning the same twin-turbocharged V8 with 552 bhp, and a top speed (with an optional increased limiter) of 189mph. It costs £83,495.

It’s a remarkable piece of performance engineering, albeit one that shares almost all of its oily bits with the existing RS6 Avant.

At its heart is the same 4-litre biturbo V8, as also seen in junior versions of the Bentley Continental, and with 552bhp (identical to the RS6). The engine uses selective cylinder de-activation to turn it into a four-cylinder under gentle use, and to boost the official economy figure to a borderline respectable 28.8mpg. In the real world, it seems to manage low-20s. Drive is supplied to all four-wheels via an eight-speed gearbox, and Audi’s torque vectoring Sports Differential at the back.

UK-spec RS7s will get air springs as standard, with the no-cost option of steel springs and ‘Dynamic Ride Control’ – variable, interconnected dampers that are claimed to reduce pitch and roll under hard use. As with the RS6, buyers will also be able to opt for carbon ceramic brakes if they’re so minded.

Audi will sell the car with three different speed limiters. The default choice is the German-standard 155mph, but buyers can opt for ‘Dynamic’ which ups this to 174mph and then ‘Dynamic Plus’ which increases top speed to a borderline ludicrous 189mph. That’s still limited: without it the RS7 would probably top 200mph.

Surprisingly, given its sleek coupe styling, the RS7 actually weighs almost exactly the same as the RS6 – a hefty 1955kg. Both cars have identical official 0-62mph times and top speeds.

Very similarly to the RS6, you’ll be unsurprised to hear. The RS7 is possibly fractionally more agile, but the most noticeable difference for the RS7 driver is the lower seating position and relatively tight-fitting cabin.

Performance is mighty – and remains the car’s defining characteristic. We recently figured an RS6 from 0-100mph in just over 8 seconds, and the saloon feels capable of matching those numbers. A brief run on an unrestricted stretch of Autobahn confirmed that – with the optional ‘Dynamic Plus’ speed limiter – the RS7 blasts through 150mph with almost contemptuous ease.

The gearbox works well too. It’s a conventional torque converter auto, but it delivers quick changes and is intelligent enough when left in ‘Drive’ to give seamless shove at any speed. In manual mode there’s a noticeable delay in changes compared to a proper twin-clutch transmission, but it’s easy to drive around.

Grip levels are extremely high, especially on the sun-scorched Bavarian roads we tested the car on. In longer, slower corners the rear sports diff could be felt doing its thing and helping to fight centrifugal force under hard cornering. It feels like a big car on narrower roads, and the steering struggles to give any impression of feedback through its over-numb assistance. The grip’s there – and you quickly build up trust that the car will respond to your bidding. But it’s not a car that’s keen to includes its driver in proceedings.

We drove a car with the DRC system, which felt too hard in its ‘Dynamic’ setting, even on smooth German roads. We suspect the majority of British buyers will opt to keep the standard air suspension.

But it’s also pricier and less practical than the RS6 Avant, which also comes with the bragging rights of being the fastest estate car in the world.

The carbon brakes worked well in fast road use, although we struggle to see the point of them on a car like this.

Under gentle use the engine shuts down four of its cylinders to boost economy, and driving it gently can get you mpg figures in the mid-20s. But drive the RS7 as it encourages you too and you’ll struggle to get out of the teens…

Here's a video review of the Audi RS7 Sportback from the launch, to help give an impression of how the coupe performs on the road.