Audi has launched the new S7, with the executive hatchback powered by a downtuned version of the 4-litre twin-turbo V8 fitted to the mighty S8 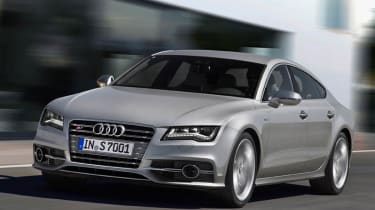 A cocktail of several things: Audi A6 underpinnings, the five-door fastback/hatchback body that makes an A6 into an A7, and a downtuned version of the twin-turbo 4-litre V8 engine from the Audi S8 – which has also appeared in the Bentley Continental. As for the '7' bit, the A7/S7 looks like an A5 Sportback that's parked a bit closer. But you knew that already.

The important things are that the S7 has 414bhp, a 4.7sec 0-62mph time and a 225g/km CO2 score, this last figure corresponding to an official average mpg of 29.4. You wouldn't have thought such figures could occupy the same sentence. In the real world, they almost certainly don't if the S7 is driven as it is surely intended to be.

It's an S-model Audi, with all that means in Quattro four-wheel drive (nominally 60 per cent rearward torque, rising to 80 when needed), taut suspension and the options of ‘Dynamic Steering’ and a sports rear differential which sends torque to the wheel with more grip instead of braking the wheel with less. Powerslides should be on the agenda, then.

But the centrepiece is the engine, able to run as a V4 under light loads by keeping the other four cylinders' inlet valves shut. It has two twin-scroll turbos sitting in the vee, and although it has less power than the 513bhp S8, the S7’s part-aluminium construction means it manages a competitive power-to-weight ratio. Power is sent roadwards via a seven-speed twin-clutch gearbox – the S8 using an eight-speed torque converter ‘box.

Good, but synthetic. There's a pure, clean V8 noise on hard acceleration, especially with the engine sound part of the Drive Select menu set to Dynamic, but it has reached you via various flaps in the exhaust system and engine shroud. There's also an Active Noise Control system which supplies out-of-phase waveforms via the sound system to counteract unwanted engine noises, most notably when the engine is running as a V4 during which time the active engine mounts are working their hardest to damp out vibrations.

The result is a smooth, sonorous power delivery and no way of feeling or hearing when four cylinders are on strike, but a hint of grit and rawness would be welcome. The S7 is undeniably rapid, though, more so than its linear torque delivery leads you to think, and the twin-clutch transmission works with typical precision aside from the odd low-speed clunk.

Powering out of a corner reveals how hard the S7 leans on its outside rear wheel, even if the example you're driving doesn't come with the Sport diff – whose benefits are most obvious on a wet road. The 'Dynamic' steering – which quickens the off-centre response, more so at low speeds – is a mixed blessing, making the S7 feel unnaturally darty; the regular system is preferable, with a surprisingly clean, precise and properly-weighted response.

In usual Audi fashion you can individually tailor all sorts of dynamic parameters, but as ever the overall Dynamic setting is best for a good time and Auto is fine when your car is to be mere transport. Unlike in an RS5, the ride is pretty supple in Auto and still properly compliant in Dynamic – on German roads, at least. This is a big, heavy car, though, and on anything but a wide open road no amount of technological interfacing can hide that fact. You always feel you're driving the interfaces, not the S7 itself. Getting properly under the S7's skin is almost impossible.

There's nothing to compare the S7 with, directly. An Aston Martin Rapide is a much more expensive interpratation of a similar idea, a Jaguar XFR is also dearer but more powerful, thirstier and lacking a hatchback. In those terms the S7 seems good value at £61,995 although that's £8000 more than a mechanically identical S6 saloon. As a high-speed five-door, but with just four seats, the S7 does a very good job. But you'll have a much more engaging time in an XFR.

The interior is a fine piece of design and construction, with the usual high-end-Audi wi-fi and Google-based internet stuff if you tick the right options boxes. Various hard trim finishes are offered, including carbonfibre and an intriguing planked-wood with aluminium between the planks.

Read our review of the S7's sister car, the new S6 saloon.