The new Audi A7 technologically bests its predecessor and rivals, but be careful what option boxes you tick

Audi says its new A7 combines the elegance of a coupe, the functionality of an Avant estate, and the prestige of a luxury saloon in one convenient package. Reading between the lines, it’s difficult not to imagine that in trying to combine the qualities of three cars it will end up being slightly worse than all of them at those respective disciplines.

The company has surprised us in the past however and the original A7 remains one of the more successful proponents of the four-door coupe genre. In styling terms alone the latest A7 lives up to its predecessor, despite a this being a busier market these days, but style can only go so far – the A7 needs to work on the road, too.

Having first driven the A7 Sportback in South Africa and driven cars on air suspension with four-wheel steering, we've now tried the car on UK roads in a more conventional setup, with steel springs and regular steering - and as it turns out, the simpler and cheaper option is actually the better choice. 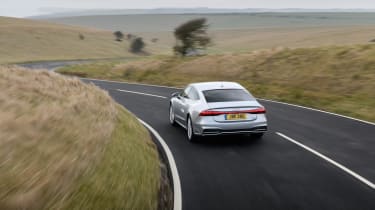 At launch Audi will offer a pair of engines in the A7 Sportback, both displacing three litres, both V6, but one running on petrol and the other diesel. We’re familiar with both now, as they’re used widely elsewhere in the Audi range, and predictably Audi expects around 80 per cent of A7 sales to go to the diesel when orders begin in April.

Both are competitive in terms of power and torque, the 3-litre TFSI (badged 55 TFSI) making 335bhp and 369lb ft of torque, and the 3-litre diesel (50 TDI) producing a lower 282bhp but a meaty 457lb ft. While both send their power to all four wheels, the route there is different for each. The TFSI gets a seven-speed dual clutch transmission, but the diesel, on account of its extra torque, uses the eight-speed ZF torque-converter auto used widely across the industry. The pair also use mild hybrid technology, detailed further below.

Those power figures are reflected in the cars’ respective performance numbers. The petrol is quickest off the mark, crossing the 62mph barrier in 5.3sec, four tenths ahead of the diesel. Both are limited to 155mph at the top end, and while combined economy and CO2 figures haven’t yet been confirmed for the diesel, the petrol is claimed to achieve 40.4mpg (on 19in wheels; 39.8mpg on 20in wheels) with 158g/km of CO2 (161g/km on 20s). 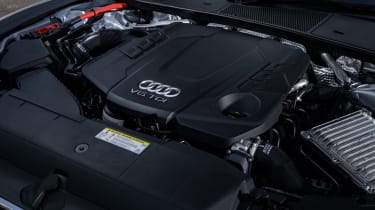 A7s also use 48-volt mild hybrid technology as standard, with a belt-driven alternator-starter and a small lithium-ion battery hidden under the luggage compartment that can recuperate energy under braking or coasting and firing up the engine as part of a start-stop system. The system can also shut down the engine when coasting for further fuel savings, while a regular pinion starter motor is included for cold starts.

Unusually, each uses a slightly different variation on Audi's "Quattro" all-wheel drive setup. The diesel is a permanent all-wheel drive system with a self-locking centre differential, but the petrol uses an electronically-controlled multi-plate clutch-type centre diff that can disengage drive entirely to the benefit of fuel efficiency. If the car detects slip at the front wheels, drive can be sent to the rears to compensate.

Inside, the A7 Sportback’s interior is much like that of the A8, most notably using a pair of touchscreens on the centre console (10.1in for the upper screen, 8.6in for the lower) to handle most minor functions. They use haptic feedback to simulate real buttons (quite convincingly, actually) and respond to smartphone-style prods, pinches and swipes. 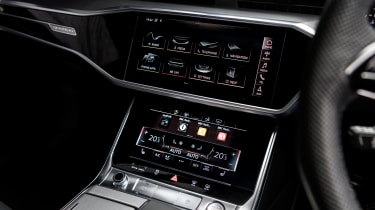 The balance of luxury and dynamism you expect from a car like this is a hard one to achieve. On our initial drive in South Africa it felt like Audi had missed the mark, but on UK roads in a different specification, matters are improved somewhat.

The problem? All cars on the original launch were equipped with both the optional adaptive air suspension and optional dynamic all-wheel steering, in both Sport and S-Line specification with 20in and 21in wheels respectively.

On the air suspension, the ride quality falls some way short of what we’d expect from a car of this type. Even in its most comfortable setting, the A7 never really settles other than on the smoothest surfaces, and the constant joggling on rougher roads isn’t just surprisingly uncomfortable, but also sends a resonance through the shell that compromises the otherwise excellent refinement.

Switch to Dynamic mode and the A7 doesn’t ride a great deal worse, but nor does it turn into a sports saloon. It's not particular sporty on the steel spring-suspended cars either, but crucially the ride is easier to deal with than it is on air. The difference is subtle but important, with the springs soaking up sharper, higher-frequency bumps more readily where the air-suspended cars constantly jiggle. Both settle down further at speed, but the improved ride of the regular setup means we'd suggest steering clear of the air suspension if you can. 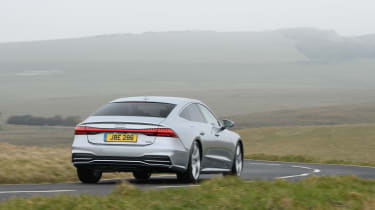 It's tempting to say likewise with the dynamic four-wheel steering. The first cars we drove, equipped with the system, didn't feel especially agile and demonstrated a tendency to wander a little at speed. Cars without don't shrink around you either - curiously so, since it made quite a difference to the larger A8 - but while your turning circle at lower speeds will be just over a meter wider, the conventionally-steered A7 doesn't seem to lose much in other driving conditions.

The steering itself is far from being a leader in its field, feeling slow to respond around the straight-ahead, but it's consistent if not particularly talkative thereafter. Unfortunately, one other complaint we had with those initial, higher specification cars - a drumming, low-frequency resonance through the bodyshell - seems to remain, and leaves you feeling a little less relaxed than you might at the end of a drive.

It’s not all bad news. The cabin is fantastic and that double touchscreen system among the easiest of its type to operate safely. The seats are comfortable and the driving position can be adjusted just-so. In addition, resonances aside, the A7 is otherwise very quiet – acoustic glazing keeps wind noise to an absolute minimum, tyre noise is relatively low, and the petrol and diesel engines are hushed at a cruise.

The petrol feels like the engine you’d pick if fuel costs aren’t a factor. It feels more than quick enough, is tuneful if not stirring, and pulls consistently and smoothly to the red line. The diesel feels stronger for a brief few moments in the mid-range, as you’d expect, but doesn’t react as keenly and runs out of interest if you try and extend it further – though the gravelly tone lower down isn’t unpleasant. Gearchanges from the two different transmissions are smooth too, though changes in the dual-clutch car are ever so slightly more noticeable than those of the ZF models. In contrast, the S Tronic cars step off the mark with greater urgency than the regular auto, which delivers a pause and then a surge when trying to make a quick getaway out of junctions and at roundabouts. 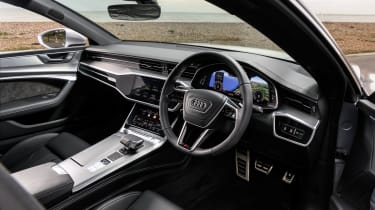 UK customers will have the option of either Sport or S Line trim, and the two engine options when the car goes on sale. The petrol Sport will begin at £55,140, while S Line will lift that to £58,040. The diesel-engined Sport begins at £54,940 on the road, and rises to £57,840 for the same engine with S Line trim. S7 and RS7 versions are likely in future.

That pricing puts the A7 Sportback roughly on par with its closest rivals. Taking the petrol for example, Audi marks out the Mercedes-Benz CLS 450 4Matic in AMG Line trim (£57,610) as the nearest competitor to the 55 TFSI S Line, as well as two BMWs – the 640i Gran Turismo (previously 5-series GT) with xDrive coming in at £57,570, and the 640i Gran Coupe in similar trim but rear-wheel drive, at £64,680.

The Mercedes is quickest, the Audi most frugal, the rear-drive BMW the lightest, and each is as likely to be chosen on its badge or styling as any objective measure. The Gran Coupe is by a small margin the drivers’ choice of the group and rides a little more fluently than the Audi too – though no car in this group stands head and shoulders above the others overall.