The new Audi S6 swaps its predecessor's thirsty V10 engine for a 4-litre twin-turbocharged V8 that combines strong performance with decent fuel economy - but can it deliver thrills? 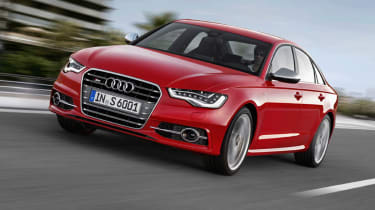 Audi's A6 was reincarnated in its current form a little over a year ago, and now it's time for the 'hot' versions. There's no sign of an RS6 just yet, but there's a new S6 – in both saloon and Avant estate guises – which uses the 4.0-litre, twin-turbo V8 that’s already been seen in both the Audi A8 and in the latest Bentley Continental.

Of course, the previous-generation S6 used the 5.2-litre V10 engine found, in modified form, in the Audi R8 and Lamborghini Gallardo, but the new V8 promises stronger pace with a claimed 25 per cent reduction in fuel consumption.

Exactly the same platform and mechanicals are found in the new Audi S7, the subject of a separate road test, so to save repetition here we suggest you read that one as well.

Quattro transmission with a rearward torque bias, adaptive air suspension, skin panels mainly in aluminium – all this is shared with the S7. Wheels are 5-spoke 19-inchers, CO2 emissions for the S6's Avant version are, strangely, 1g/km higher than the saloon's and the S7's which unfortunately tips it into the highest tax bracket.

The engine is the biggest news, with 414bhp and 406lb ft on tap and able to run as a V4 under light loads by keeping the other four cylinders' inlet valves shut. Two twin-scroll turbos sit in the vee between the cylinder banks, and unlike the Bentley version it has active engine mounts and a stop-start system. Power is less than the 500bhp S8, and the gearbox is a seven-speed twin-clutch unit instead of the S8’s eight-speed torque converter auto.

Remarkably like the S7, unsurprisingly enough. But, curiously, the S6 Avant steers with a little less precision and feels a bit clumsier, making it harder for your brain to hook into the balancing of the considerable dynamic forces at work here. The result is that while the S7, given space, encourages you into testing out what it can do, the S6 Avant makes you feel happier just to cruise and watch the world go by.

And the saloon? The example we drove had the sports rear differential and Dynamic Steering, which the Avant did not. The result, relatively speaking, was a more engaging car, if a touch too darty in the steering response given the lack of real feedback under the palms of your hands. Whether that's down to the clever diff or the possibly-stiffer body is hard to pin down.

Either way, the S7, diff or not, proves to be the better car -  a result which may well cause head-scratching among the engineers who created three cars which are meant to be identical beyond the superstructure and interior styling.

It's not quite an M5 rival, but the S6 has a bit more thrust than an M-Sported BMW 550i or a Jaguar XF V8. And at £53,995 it's a lot cheaper than an XFR. For bhp per pound, the S6 unexpectedly finds itself at the top of its class. We'd still go for one of the Jaguars, though – with fewer parameters to be electronically played with, they give a more genuine-feeling drive with a greater sense that the engineers knew best what works.