New 2018 Audi A6 Avant review - is the tech-leading estate a 5-series Touring rival?

New Avant improves upon its predecessor, but while comfortable it still lags rivals as a driver’s car 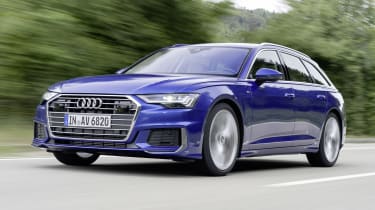 Whether you use the extra practicality or not, Audi has crafted its Avant-badged estates into some of its most desirable models over the last few decades, promising a mix of Audi’s usual qualities with rakish styling and improved utility.

With greater passenger volume before and no compromise in terms of load space – 565-1680 litres seats up and down, identical to the previous car – the latest Avant looks like continuing that trend, and while a few fussy styling details let the new car down (fake exhaust tips and seemingly random bodywork creases, to name just two), it’s as imposing and handsome as ever.

> Click here for our review of the BMW 5-series Touring

It’s also the most feature-packed A6 Avant yet, adopting technology now used widely across Audi’s line-up and sure to filter even further down the range in future. We’ll have to wait a little for the S6 and RS6 variants, but in the meantime we’ve got behind the wheel of the more conventional models arriving in late September. 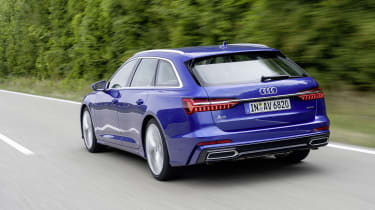 The engine range comprises a duo of diesels at launch. The 40 TDI is a 2-litre alloy block four-cylinder developing 201bhp and sending its power through a seven-speed S Tronic dual-clutch transmission.

Initially front-wheel drive, it’ll later be available with a clutch-based, part-time all-wheel-drive system that allows instant switching between sending power to the front wheels and powering all four. Zero to 62mph comes up in a reasonable 8.3sec, with a 149mph top speed and quoted combined economy of 60.1mpg.

Quicker still is the 50 TDI, which uses the now-familiar 3-litre V6 turbodiesel in 282bhp form. Power here is transmitted through an eight-speed Tiptronic auto and permanent all-wheel drive with a locking centre differential, able to direct up to 70 per cent of torque to the front and 85 per cent to the rear axle in the most extreme circumstances. An electronically limited 155mph top speed joins a 5.7sec 0-62mph time and 48.7mpg combined economy figure on the spec sheet.

Both variants feature ‘mild hybrid’ assistance – essentially an integrated starter-generator and small lithium-ion battery that can shut off the engine and restart it quickly for engine-off coasting and stop-start, and recuperate energy under deceleration and braking. On the V6 it’s a 48V system, and 12V on the four-cylinder.

Like other recent Audis the A6 Avant is available with four-wheel steering, adaptive air suspension and a wide range of options to make you wonder whether there’s merit in choosing the larger A7 and A8 over their smaller A6 sibling. That extends to the interior, which uses the dual touchscreen set-up from the larger cars, and to much of the technology – the £1950 Tour Pack comes with Adaptive Cruise Assist, which is able to control the car’s acceleration and braking over the entire range of speeds and guide it between lanes on the motorway.

Dynamic all-wheel steering trims 1.1 metres from the A6 Avant’s turning circle, its rear wheels steering in the opposite direction to the fronts at low speeds and the same at higher speeds for stability. 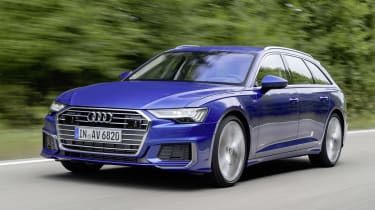 Without putting saloon and estate back to back the Avant doesn’t feel any different to its four-door sibling, and doesn’t seem troubled by the extra interior volume in terms of noise. Refinement continues to be one of the new A6’s strongest suits, with minimal rustle at speed, low levels of noise and vibration from the engines (though the four-cylinder diesel understandably lags the V6s in this regard) and relatively little road noise despite the sizeable rolling stock.

Ride quality is respectable, too, even on the larger wheel sizes, with the caveat that the surfaces around the Neckarsulm launch were predictably smooth. Only occasionally did bumps disturb the cabin, and in common with the A6 saloon the adaptive air-suspended V6 diesel felt slightly harsher over these imperfections than the steel-sprung, adaptive damper-equipped 2-litre TDI.

The 40 TDI test models used conventional steering where the 50 TDI had dynamic all-wheel steering, and these set-ups again matched our previous findings: the four-wheel-steer cars have a remarkable ability to shrink around you when parking or negotiating rapid combinations of tight corners, but the conventionallyvsteered models have more natural responses and weighting.

That results in the slightly unusual situation of the 40 TDI being little less engaging than the more powerful models in the range, and on dry roads at least, the front-drive 2-litre is no more troubled for traction than the quattro V6s. The sixes have the smoother, punchier engines, of course – though they aren’t quite as satisfying to use as Mercedes’ new in-line six diesels or BMW’s existing ones – but the 40 TDI is no red-headed stepchild. Bottom line: until the S6 and RS6 arrive, there’s no stand-out A6 for driver engagement, but all smooth away the stresses of daily driving.

No manual transmission is available, so those figures all apply to automatic-equipped cars, but the 40 TDIs are, for the time being, front-wheel drive only, so expect an increase once all-wheel drive is available. Sport models come as standard on 18-inch alloy wheels and S Lines on 19-inch rims (also wearing different front and rear bumpers), but wheel upgrades are available, as are numerous option packs. 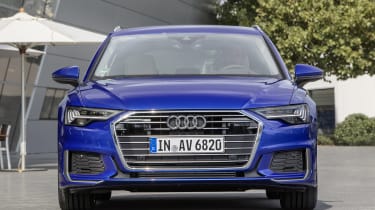 Pricing comes in at slightly more than the A6’s immediate rivals from BMW (5-series Touring), Mercedes-Benz (E-class estate) and Jaguar (XF Sportbrake), with no great benefits in terms of performance, efficiency or equipment when compared like-for-like, so at this level in the market personal choice and brand loyalty plays as big a part as anything else.

That said, it’s our job to pick a favourite, and from the perspective of driving fun, all of Audi’s rivals are more engaging to drive, even where Audi-matching all-wheel drive is available (as standard, the BMW, Merc and Jag are all rear-drive), while the Mercedes is the class-leader in terms of luggage space.