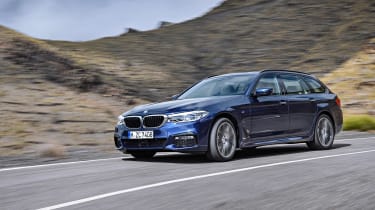 BMW has announced details and revealed images of the all-new 5-series Touring, which marries increased space with the German carmaker's latest semi-autonomous technology and a range of powerful and efficient engines.

Like the saloon, the new 5-series Touring doesn't take any huge visual steps forward from its predecessor, but in terms of technology and equipment it's every bit the downscaled 7-series of its saloon counterpart.

And while it's not a comfortable subject for the average evo reader, much of that technology comes in the form of driver-assistance systems that put control in the hands of computers.

While not yet allowing the same levels of hands-off ability as Tesla offers in the Model S, the list is long: Collision Warning, Pedestrian Warning and City Braking are all present and correct, as is Night Vision Assist and Crossing Traffic Warning System (all functions that do pretty much what they say on the tin).

An extra layer of autonomy is suggested in Cruise Control with Braking - which can respond to slowing traffic in front - and the optional Active Cruise Control with Stop & Go, which can effectively keep pace with traffic (even on autobahns, working at up to 130mph), speeding up and slowing down with the vehicle ahead. Lane Keeping Assist and Side Collision Warning are also both on the features list.

So far, so safe, but more interesting to us are the 5-series Touring's weight savings thanks to significant use of materials like aluminium and magnesium, and shedding weight from items like the rear differential. 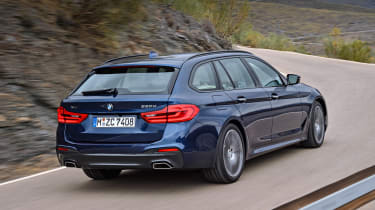 These savings allow BMW's latest range of EfficientDynamics engines to do their best work, whether in 2-litre petrol or diesel form (as the 530i and 520d respectively) or as the powerful six-cylinder 530d and 540i xDrive, the latter of which produces 335bhp and still manages an official 37.6mpg. Most frugal is the 65.6mpg 520d.

An eight-speed automatic transmission is standard across the range. The 520d and 530i both come with rear-wheel drive, while the 530d is available in both rear-drive and xDrive all-wheel drive forms. The 540i is xDrive-only.

Owners will no doubt be interesting in learning just how much space the new Touring offers. The answer is 570 litres seats-up (a ten-litre improvement on the old model) and 1700 litres with the seats folded flat, a 30-litre bump over the old car. Both are shy of the current Mercedes-Benz E-class however, which somehow packs 640 litres up/1820 litres down into its 5-series-sized frame.