Short on fun factor, but remarkably capable in every other area, the latest 5-series continues to impress 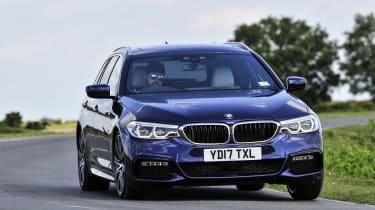 The BMW 5-series Touring is now in its fifth generation, having started with the E34 5-series Touring in 1991. The mission has remained consistent throughout though, in mixing the 5-series’ wide band of talents with the extra utility and practicality of an estate body style.

BMW expects around a fifth of UK customers to opt for this Touring model over the car’s lifecycle, and given this generation 5-series is already selling strongly, it’s a car we’ll be seeing plenty of on the UK’s roads. That it’s more practical than the saloon is a given, but what’s it like to drive?

Launch powerplants include two 2-litre, four cylinder units, and a pair of 3-litre, inline-six engines, with a petrol and a diesel of each. Here we’ve driven the two diesels, the 520d in rear-wheel drive form and the all-wheel drive 530d xDrive, both utilising an 8-speed Steptronic automatic gearbox.

Refinement is a 5-series strong suit, and both the 520d and 530d tested were never anything less than hushed in virtually all circumstances. Even sinking the throttle pedal on the four-cylinder 520d doesn’t generate much noise, and backing off to a cruise sees both engines fade away into the background, with only wind rustle disturbing the cabin’s calm. The six-cylinder is among the better diesels currently on the market, using its massive torque to good effect for effortless acceleration at any engine speed. There’s even the hint of a sporty engine note. 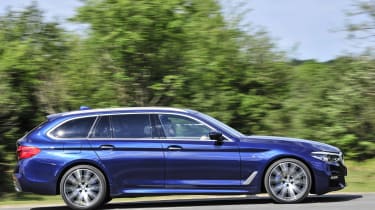 The Touring, as you’d expect, is mechanically and technically much the same as the saloon. It’s not quite as aerodynamic - its coefficient of drag of 0.28 isn’t quite as slick as the saloon’s 0.22 - but the tradeoff is a large load capacity of between 570-1700 litres. Usefully, the new Five’s reduction in kerb weight has allowed a correspondingly larger payload capacity, rising by up to 120kg for a payload of 720-730kg depending on the model. The rear seats split 40:20:40 and, like all previous 5-series Tourings, the boot area can be accessed by an opening rear window in the tailgate, as well as via the full tailgate itself.

In Touring form the latest 5-series is as impressively capable as it is as a saloon, regardless of the engine powering it and the extra weight sitting over the rear axle. It’s a car that raises its game as you raise yours, seemingly capable of absorbing extra pace with no extra fuss, in turn making it a car that covers ground quicker than you’re ever likely to need in an executive car.

A combination of factors is to thank for this. The engines offer ample power and torque, with even the 520d delivering strong, easy pace without ever becoming too vocal, and the 530d in xDrive form combining mighty mid-range torque with unflappable traction. There’s also a supple ride on craggy surfaces, good balance and great body control. 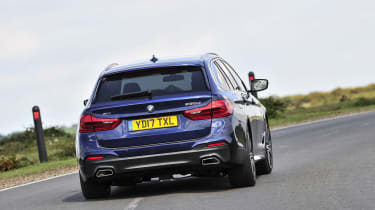 It’s all tied together through switchable driving modes, but the most impressive of these is Adaptive. It’s the new Five’s ace card, adjusting the car’s settings according to your driving style but also using navigation data to assist the gearbox in its changes. Thus you get an ideal mix of pliancy to the ride and elasticity in the drivetrain around town or on a motorway, and sharper steering, firmer suspension and a more responsive drivetrain on a country road.

The transition is seamless and changes from the adaptive transmission so well-chosen (it’ll also hang onto gears if you’re approaching a corner and immediately pick higher, smoother ratios if you happen across an urban speed limit) that you rarely ever feel the need to use the paddles to do things yourself.

It’s let down in only a few areas. The steering doesn’t offer a great deal of feedback and occasionally feels a little gloopy with artificial resistance (though it’s otherwise well-weighted and direct), and the 5-series’ overall level of competence means you never feel much like you’re interacting with the car. Still, if you chose one for the daily commute, you’d probably not have much to complain about.

The 5-series Touring range kicks off with the 520d SE at £38,385. It’s expected to be the most popular model in the range - befitting a car capable of 65.7mpg on the combined fuel economy cycle but still possessing sub-8-second 0-62mph performance - and while it’s more expensive than the £35,980 you’ll pay for an Audi A6 2.0 TDI SE Avant or a £37,160 Mercedes-Benz E200d SE Estate, BMW claims higher equipment levels for its offering. 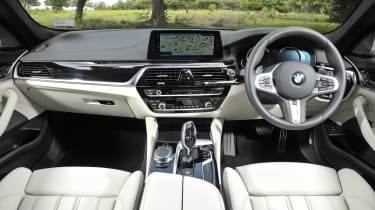 In 530d xDrive form pricing begins at £48,235 for a car in SE trim. Given our 520d carried a spec sheet listing its circa-£54,000 price tag and the 530d a near-£64,000 figure, it’s safe to assume that liberal ticking of option boxes can quickly lift the price of any 5-series Touring to eye-watering levels. From behind the wheel though, it’s hard not to conclude that either model is capable of justifying its pricing. 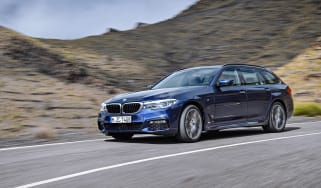 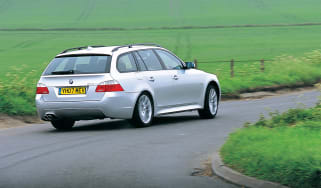 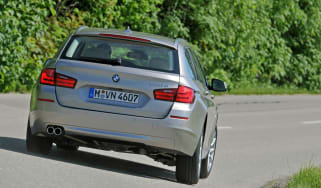