A brilliantly resolved car; puts the sparkle back into the 5-series while offering terrific comfort, tech and refinement

The 530d is a core model in the new G30 5-series range. Not in terms of sales volume, maybe, for once again it’s the 520d that will dominate the UK’s motorway network, but in terms of the current luxury saloon state of the art this is the key battleground: the tech-heavy ‘big diesel’ model.

The G30 weighs up to 100kg less than the outgoing F10 5 Series, despite it being a larger car by any measurement. While the 7-series’ carbon core hasn’t been passed down the family hierarchy, a carefully considered selection of materials with the new L7 platform helps to cut the flab, such as an aluminium boot lid and weight reduction in the doors.

With double wishbones on the front axle and a new multi-link rear, the G30 can be had with either a fixed rate suspension setup, a passive M Sport setup that lowers the ride height by 10mm, or with a variable damper setup (DDC). A fourth option is Active Roll Stabilisation (electrically-adjusted anti-roll bars), and there’s also optional rear-wheel steering to help disguise the Five’s bulk in corners.

BMW’s four-wheel drive system xDrive is now an option on all models in the range, and in the UK is compulsory on the 540i model. Gearboxes are all auto-only, for now at any rate; meanwhile, driver assistance reaches to virtually self-drive levels, and there's enough other tech features to fill an entire story alone. 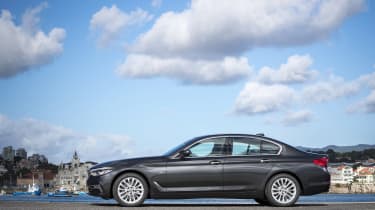 The latest ‘modular’ turbocharged straight-six diesel pumps out 261bhp and 457lbft of torque, and predictably it’s the latter figure that has the real relevance in this case. Combined with the standard eight-speed auto, it gives the 530d genuine performance car pace, with 0-62mph taking 5.7-seconds, or just 5.4-seconds when combined with the xDrive setup as sampled here.

What the figures can’t convey is just what a satisfying engine this is to use. BMW’s SYNTAK sound insulation for the engine means it’s virtually inaudible at times, but it has a characteristic growl and rumble when worked hard that’s as pleasing as it is instantly recognisable. Depress the throttle and it surges the 530d forward with conviction, whatever the speed or gear.

The 530d xDrive is an astoundingly capable car. Sheer capability alone isn’t usually the stuff evo gets excited about, but the G30’s core qualities and breadth of abilities generate a slow-burn satisfaction that’s surely the stuff of a rewarding long-term relationship, day in, day out.

Our car had the combination of variable dampers and standard 18in wheels, and this eliminates the occasional tremors from each corner felt on a car shod with 19in rims. In fact, the ride comfort is superb, easily a match for luxury cars at two or three the times the price. The ‘shell feels immensely stiff, but the key according to the engineers has been to increase the localised stiffness around the sub-assemblies and suspension mounting points. It's certainly worked: this is splendid isolation.

But the 530d has another side: the electrically assisted steering is well judged, with an easy-going predictability that means you soon take steering the car for granted. Push harder, and in Sport – or even the optional Adaptive function that cleverly pre-empts what setting the car might need by some horrendously complicated 3D mathematical model – and the 530d responds in kind. The rear-wheel steering means the car turns into the corner far more keenly than you’d expect, and it’s possible to be unfailingly precise with where you place it on the road. 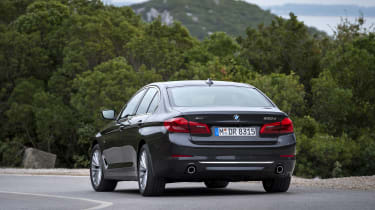 Once into the corner outright grip is strong, but it’s the way the four-wheel drive system shuffles the power around from that point on that makes this such a potent car: even in very wet conditions the DSC light never blinked, the car resisted understeer, there was no sense of the shift in torque distribution and it was possible to use all that toque ludicrously early in the corner. Progress in this manner is surprisingly swift to say the least.

Another change of road, and the 5-series shifts character once more. It’s incredibly quiet on the motorway, where it can even drive itself for short periods thanks to that brain-scrambling autonomous driving tech. The seats are supremely comfortable, there’s more room in the rear of the passenger compartment than before, and a larger luggage area. It feels beautifully and exactingly made; the new iDrive system, with its larger, 10.25in touchscreen including gesture control, is crisp, clear and immediate in response, and while the cabin doesn’t quite have the wow factor of the current Mercedes E-class, the perception of quality seems higher to me.

From whatever angle you judge it the new £45,965 530d is a ferociously advanced and competitive product, and one that must be causing some severe headaches in Stuttgart, Ingolstadt and Coventry. Jaguar’s XF remains an appealingly effervescent character when the road turns twisty, but falls significantly short in other areas. The E-class is a fine car, but the BMW has the comfort, tech and the dynamic behaviour, while Audi’s new A6 can’t come soon enough, for them.