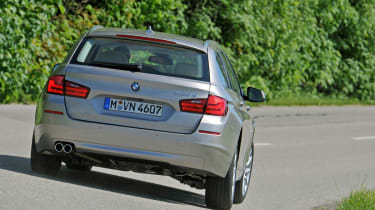 Sensible car, the 530d Touring. All that space and versatility combined with a torquetastic yet thrifty 3-litre turbodiesel. And all for an on-the-road price of £39,400, which is reasonable enough for a large slice of premium BM wagon. Except that our test car came laden with more than £20,000 worth of extras, including the desirable Dynamic package (£2820) and Adaptive Drive (£2220), taking the total to a whisker under sixty grand. Bonkers.

The new 5 looks sober, smart, if perhaps just a tad dull. It feels more substantial, more refined, more grown-up than ever. The optional 19in alloys and stiff-sidewalled Bridgestone run-flats thump and bump over ridges and craters but generally the ride’s good, even in the sportiest of the Dynamic pack’s four settings. The trade-off for the cavernous load-space is a slightly echoey shell that exaggerates every thump.

The steering’s meatier than you might imagine, accurate and nicely geared, but devoid of real feel. The eight-speed (eight!) paddle-shift auto is discreet and sharp-acting, and the performance is strong.

The Touring never quite throws off its size and weight, but it never gets unwieldy either. Can’t help feeling it’d be a bit more fluid on the standard 17in wheels, and better still with regular tyres rather than run-flats. Oh and a high-revving, petrol engine would be nice. But I suspect that would be missing the point.