Swift, superbly refined and thoroughly advanced it may be, but this isn’t the pick of BMW’s excellent new 5-series range so far 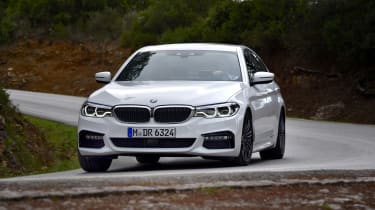 Meet the all-new seventh generation BMW 5-series, the G30. This is one of those cars that really, really matters for BMW, given one in every four euros of profit made by the company can be attributed to the 5-series family.

While the new ‘Five’ doesn’t adopt the carbon core of the 7-series, it nevertheless weighs up to 100kg less than the outgoing F10 model (despite being a larger car) thanks to careful material selection throughout. BMW talks about aluminium luggage compartment lids, lighter doors, magnesium dashboard frames, each measure snatching kilos back in an endless dietary war against the increase in tech.

The new ‘L7’ platform uses double wishbones on the front axle and a multi-link set-up at the rear. Springs and dampers are of the conventional type, with no air struts offered, but there are nevertheless four chassis options. Standard SE models run a fixed rate passive set up; M Sport models the same, but with a firmer setting and a 10mm ride height drop; and any Five can be ordered with DDC variable dampers. In addition, there is the Adaptive Drive option that combines DDC with Active Roll Stabilisation, the latter’s adjustable anti-roll bars now operated via electric motors, no longer by hydraulics. Finally, there is Integral Active Steering, which adjusts the toe angle of the rear wheels by up to three degrees: in the opposite direction to the steering input below 40 mph, and in the same direction at higher speeds.

The new car can now be ordered with BMW’s xDrive four-wheel drive system on all models – in fact, variants such as this 540i are only available as xDrive models in the UK. 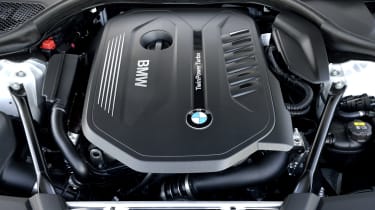 At launch, the 540i is the most potent petrol-powered models offered in the UK, with the four-cylinder 530i at the foot of the range. These are the latest modular family of engines, all turbocharged. BMW has released details about the new M550i which will join the range in March 2017.

> Click here to read more about the BMW M550i xDrive

There is no manual gearbox option in the UK, at least for the moment, with all models using the excellent eight-speed Steptronic ‘box, while the car’s braking ability can be uprated with an M Performance brake option – as fitted to our 540i test car.

What else? Well, too much to mention, frankly. Autonomous driving seems only a few steps away as the Five can drive itself at speeds up to 130mph, even executing a lane change, as long as you keep touching the ‘wheel to assure it you haven’t dozed off. The luggage compartment is larger, there’s usefully more room in the rear of the passenger compartment, and while the new Five’s driver-centric interior doesn’t quite match the wow factor of the current Mercedes-Benz E-class, the perception of quality it exudes, the general solidity of it, the materials, are all hugely impressive. At the core is a new iDrive system, featuring a 10.25in display that now supports touchscreen operation and gesture control as well as the traditional operation via the centre console placed controller.

Petrol-engined Fives are predicted to account for just 5% of sales in the UK, and while that might make the enthusiasts amongst us sad, it’s actually not a great loss: this isn’t the best G30.

The 3-litre straight six 540i fires up and idles from the outside with a surprisingly theatrical growl, suggesting that the maverick decision of ‘going petrol’ may be vindicated. With 335bhp and 332lbft of torque it’s an impression reinforced by dramatic acceleration: after all, this is a soberly suited executive car that punches from 0-60mph in just 4.8-seconds (in xDrive form), and in Sport it responds crisply and keenly to the throttle. Ratio upon ratio slips instantly into place with the eight-speeder, whether manually controlled with paddles on the optional sport ‘wheel or automatically, even if the exaggerated bump in Sport can be a bit annoying.

So why is the 530d so much more appealing?  Truth is, the 540i’s initial flourish of ‘personality’ is no more than a brief acknowledgment to the great naturally aspirated sixes of the past. Its linear delivery and monotone voice, strained at higher rpms, mean it soon loses that lustre, whereas the 530d’s 457lbft punch in the kidneys and accompanying delivery - charismatic, deep and gravelly, but superbly refined – never fail to be satisfying. Despite its livelier top end the 540i feels no faster in the real world, uses more fuel and sounds less appealing. 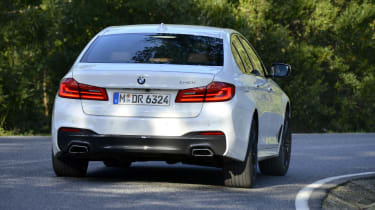 Sadly, the only 540i models present on the launch were to rear-wheel drive configuration, and as already mentioned this isn’t a combination that’s going to be available in the UK. Still, it doesn’t take long to be won over by the new car’s extraordinary refinement; both in noise suppression and ride quality (the latter with the variable damper option). Even so, the 19in wheels fitted to this car occasionally sent shudders through the structure over potholes, whereas a drive in a car on 18s didn’t do this at all.

The electric power assistance is definitely one of BMW’s better efforts, with a progression and weighting that inspires confidence, and combined with the agility brought about by the rear-wheel steering means that the G30 can really be hustled along. This is still a large, often aloof executive car, but it is more entertaining than the last one and impressively quick across the ground.