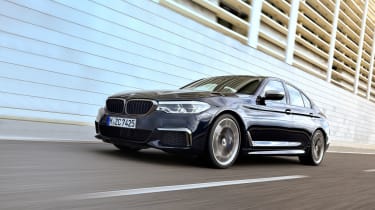 BMW has released details of its M550i xDrive – the first sporty version of its newest saloon. We were impressed with the sophistication and refinement of the latest 5-series when we drove it for the first time, but the changes made by BMW’s M division to create the M550i xDrive promise to liberate some fun from what is at heart a sensible executive car. With more power and a sharper chassis, hopefully the new M550i will be exciting enough to distract us until a new M5 is released in a few years’ time.

> Click here to read our review of the latest 5-series

The new M550i xDrive is powered by BMW’s N63 twin-turbocharged 4.4-litre V8 engine, which has been tweaked and fettled by the M division. It isn’t a proper M engine but it is closely related to the V8 that powers the F10 M5, and like that powerplant it has its turbos positioned between the banks of cylinders in a hot-V configuration. The M550i’s engine has a host of high-tech features including direct injection and variable cam timing on each of the four camshafts. The two turbochargers, meanwhile, are twin-scroll units. 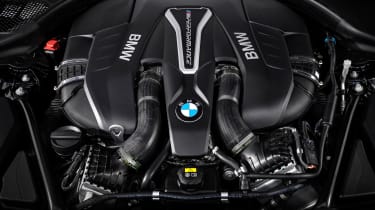 Such impressive acceleration is partly down to the traction the M550i gains from being four-wheel drive. The xDrive system can distribute torque to whichever axle needs it the most to improve grip. However, in true BMW style, the system favours the rear axle. There’s only one choice of gearbox, and it won’t come as a great surprise which one it is. The M550i xDrive has the eight-speed ZF automatic that you’ll find in plenty of other BMWs and in Audis, Jaguars, Land Rovers, Alfa Romeos, Maseratis and Aston Martins. 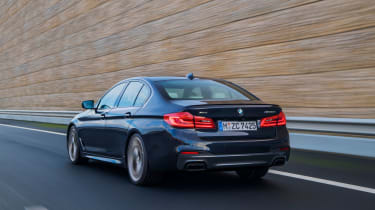 The M550i xDrive comes with M Sport-specific suspension, which means it sits 10mm lower than a standard 5-series and has adaptive dampers at each corner. The dampers, along with the throttle response and steering weight, change characteristics when the M550i is switched between its driving modes.

So that you can tell the M550i from ordinary 5-series models, it has either 19- or 20-inch M wheels finished in matt grey and blue brake calipers. The body has also been given a more aggressive look with a rear spoiler and exhaust system finished in black chrome. The front grille surrounds, mirror caps and bumper and side vents are painted the same matt grey as the wheels.

The M550i xDrive may well be the sportiest version of this new 5-series so far, but it’s also not short of comfort-enhancing safety systems. As standard there’s accident and lane-change warnings and the M550i can also be equipped with radar cruise control that helps to keep the driver in lane. The car can monitor the speed limit to automatically adjust your speed, too.