Audi has introduced the third generation A6 Allroad estate, along with its mighty new 308bhp BiTDI engine 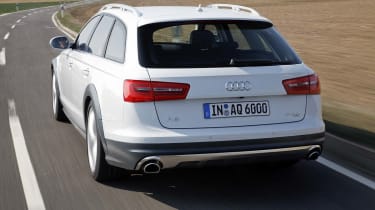 This is the third-generation of Audi’s successful A6 Allroad franchise, with the idea pretty much as before – an A6 Avant estate with the height-adjusting air suspension to give it some modest off-road ability.

We’re testing it fitted with the new twin-turbocharged 3-litre BiTDI diesel engine that will sit at the top of the range, and which combines 308bhp with an official eco score of 42.2 mpg.

This A6 sticks closely to the established recipe, with the Allroad using its height adjustable air suspension to give it decent manners both on and off road. The selectable ‘allroad’ mode raises the ride height by 35mm, with an extra 10mm of ‘lift’ mode available at super low speeds.

The net result isn’t going to rival a Land Rover Defender when it comes to crossing the wilderness, but the Allroad’s ramped ride height - and the ability of the Quattro four-wheel system to redistribute torque when it gets slippery – does mean it can scramble its way over modest obstacles without expensive crunching sounds. There’s also a hill descent system to regulate speed on tricky descents.

As before, plastic body cladding is provided on the wheelarches and sills to add to the impression of visual toughness, but it doesn’t give anything more than nominal extra protection.

The air suspension also lowers the ride height by 15mm at higher speeds to trim the A6’s C-of-G.

We’ve already encountered the BiTDI, which uses twin turbochargers to deliver its specific output of over 100bhp/ litre, accompanied by 479lb ft of torque. It uses two ‘series’ turbochargers – one connected to the other – with a smaller blower turning at lower engine speeds and a larger one taking over from 2500rpm onwards. Audi claims a 0-62mph time of 5.6 seconds and an electronically limited 155mph top speed. It uses an eight-speed autobox, the engine’s torque output being too much for the seven-speed twin-clutch transmission fitted to the 3-litre TDI and TFSI versions.

Pretty much exactly the same as the standard A6 Avant – which was, presumably, the whole idea. The air suspension works well, at least on the German tarmac on which we tested the car, combining supple ride quality with an impressive resistance to roll in corners. As with all of the A6 clan, the steering’s artificial electric weight requires acclimatisation, but once you get used to it it’s possible to pilot the Allroad along a winding road with an impressive degree of precision.

The engine is a stormer, too. Even hardened diesel-phobes will have difficulty keeping their hearts hardened against the BiTDI’s combination of urge and a burbling soundtrack – helped by an acoustic flap in the exhaust. On an appropriately empty stretch of Autobahn, the Allroad proved willing to wind itself up to its 155mph limiter at a rate that very few cars could live with – let alone two-tonne estates with slight off-road potential.

And off-road? Well, it would have been rude not to find out. As you’d expect, the Allroad is no mountain goat, but with the suspension raised it proved willing to scramble over a rough patch of German forest track in a convincing fashion. It’s certainly as good in the rough as most of its butch-looking psuedo SUV rivals.

The poor old Volvo XC70 D5 – which is the closest match to the Allroad – doesn’t get close in terms of performance numbers, although it comes with a big discount. The Allroad is also usefully cheaper than the equivalent Audi Q7.

UK spec is relatively generous with standard leather, Bluetooth and the MMI navigation system. But, being an Audi, the options list is deep and expensive: get frisky with the extras and you’ll easily push the BiTDI to well over £70K.

More on A6 Allroad 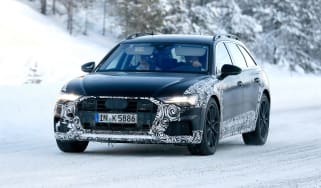 Next Audi A6 Allroad ready to rival E350d All Terrain 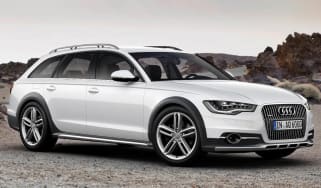 Audi pulls the wraps off its third-generation A6 Allroad, a hiked-up Avant with quattro 4WD and lots of clever tech
Skip to HeaderSkip to Content