Audi pulls the wraps off its third-generation A6 Allroad, a hiked-up Avant with quattro 4WD and lots of clever tech 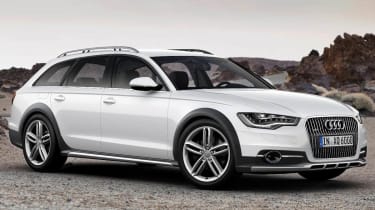 Audi has unveiled its new A6 Allroad. It’s the third iteration of the taller-riding A6, which sits halfway between estate and SUV.  It rides 60mm higher than a standard A6 Avant, and gets four-level adaptive air suspension as standard. As you’d hope, quattro all-wheel drive is fitted to all models. It also looks noticeably butcher than other A6s thanks to extended side sills, flared wings, a new grille and roof rails. Initially, there’s three engine choices, all V6s, with one petrol-powered unit – a 306bhp/325lb ft 3.0-litre TFSI, capable of 31.7mpg – and two diesels, 201bhp/332lb ft and 241bhp/428lb ft tunes of 3.0-litre TDI, the most frugal of which tops 46mpg. All engines boast turbocharging and direct injection, and are linked to a seven-speed S-tronic twin-clutch gearbox. Expect an ultra-brisk A6 Allroad equipped with Audi’s 309bhp twin-turbo 3.0-litre V6 TDI at a later date, serving up a 5.6sec 0-62mph sprint via an eight-speed Tiptronic transmission. The four-wheel-drive system is permanent and paired with torque vectoring, which brakes the wheels on the inside of corners to boost traction. Audi’s sport differential – which varies power continually between the rear wheels during cornering – is on the options list. The adaptive air suspension lowers the Allroad’s body by 15mm at speed, and can jack it up by 35mm when rougher terrain approaches. There’s also a hill descent control system for, you guessed it, downhill off-road driving. Inside, there’s the usual plethora of Audi gadgetry on offer, with Bang and Olufsen sound, in-car WLAN internet access, radar-based cruise control and a self-parking system among the options. Expect a wealth of tech options box ticking to substantially add to the A6 Allroad’s list price, though, the range starting at a very reasonable £43,145. UK sales begin in February, with deliveries in spring. Expect to see the A6 Allroad making its publich debut at the 2012 Geneva motor show in March.