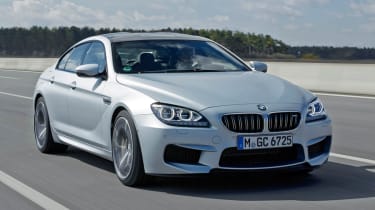 The four-door version of the M6, yours for the small consideration of £97,490. As such it’s either a worthy pinnacle for the BMW range – or proof that the company’s niche-within-niche model strategy has finally jumped the shark, depending on your point of view. The M6 Gran Coupe is, in effect, a four door version of a two door version of a four door car. And although it sits lower than its M5 sister, it shares the same mechanical package and costs £24,000 more.

We’d never deny the star status of BMW M’s 4.4-litre twin-turbocharged V8 engine, but in the Gran Coupe it’s not been changed in any significant way over the existing M5 and M6. That means an identical 552bhp output, the peak delivered flat from 6000rpm to 7000rpm, and sent to the rear axle through the familiar seven-speed DCT twin-clutch transmission. BMW claims a 4.2-sec 0-62mph time, a tenth quicker than the M5. In Europe the M6 will also be offered with an optional ‘M-Driver’s package’, which raises the speed limiter to a dizzying 189mph. British buyers will be denied the chance to buy it; we’re told there’s no demand.

Other changes over the regular Gran Coupe are limited to the usual M-ificiation. Inside the cabin there’s the familiar bulbous gear selector, surrounded by the buttons for the various switchable driving modes. (The engine map can be toggled between ‘economy’, ‘sport’ and ‘sport plus’, the adaptable dampers and steering both between ‘comfort’, ‘sport’ and ‘sport plus’. You can also alter the gear change speed for both the manual and automatic modes.)

Like the M6 coupe, the Gran Coupe gets a roof made from glass reinforced carbonfibre, plus an underfloor diffuser made from the same material, and charged with keeping it stuck to the ground at speed.

As you’d expect – like a synthesis between the M5 and M6. Although it’s  noticeably softer-edged than the hardcore M6 Coupe, but much of the driving experience sticks closely to the script established by its two-door sister. You sit far lower in the Gran Coupe than in the M5, with your frontal view limited by the same massive A-pillars. The cabin feels is snug for driver and front seat passenger, but its not excessively tight.

Performance is as towering as in the M5 and M6: the Gran Coupe can smash speed limits with the sort of effortless disdain you suspect would play very badly as an excuse in the magistrates’ court. The twin-turbocharged V8 spools up without any lag and progress is relentless from around 2000rpm until the limiter calls time at 7200rpm. Such is the engine’s torque that, despite the choice of seven ratios, you can tackle pretty much all a typical ‘A’ or ‘B’ road could throw at you using just third and fourth gears. The DCT gearbox is extremely fast in any of its three speed settings, with the quickest adding a noticeable thump to upchanges that you suspect is there more for psychological reasons than for any substantial improvement in change speeds. As before, the steering definitely feels best in ‘comfort’ or ‘sport’ modes; ‘sports plus’ adds needless extra weight.

Differences over the M5 and M6 Coupe? In performance terms, they are so negligible as to be effectively undetectable without recourse to timing gear. Chassis settings feel slightly softer, certainly with the dampers in ‘comfort’ mode, but grip levels and the car’s dynamic balance – with huge grip and the potential for huge oversteer if you’ve taken the brave pills - are effectively identical between the three cars. Getting subjective, the Gran Coupe also seems to let marginally more road and wind noise into its cabin than the M5 when set to a 100mph Autobahn cruise.

BMW admits that it sees the Gran Coupe as the ‘M car driving experience at its most exclusive,’ an opinion we suspect the market will agree with. It’s £3670 more expensive than the M6 Coupe and the price differential over the M5 is nearly enough to buy a BMW M135i. Rationally, it’s a supplement that the Gran Cabrio struggles to justify; emotionally it might be a different matter.

Looking outside the BMW family, it’s also £15,585 pricier than the very lovely Mercedes CLS 63 AMG, which would likely be easier to live with on a day-to-day basis. Of course, if you choose to look in the other direction and compare it to the £124,000 Porsche Panamera Turbo S or the £149,000 Aston Martin Rapide S then you could argue it offers excellent value for money.

The rear seats are big enough for occasional adult use, although taller rear seat occupants will soon start to whinge on longer journeys. The boot is a healthy size, though – and you can fold the rear seats for bigger loads.