New engine and upgrade package for the big coupe 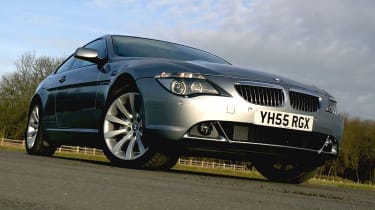 BMW has been getting itself in a bit of a fuddle with its model numbering system. It's not the first time this has happened, but it's just as serious as the last outbreak, which saw a 2.5-litre 323i and a 1.8 litre 316i. This time what should have been called the 648i has been given the 650i moniker. In old BMW speak, this would suggest a 6-series with a tasty 5-litre V12 under the bonnet; in fact, power comes from a 4.8-litre V8.

Not that you should hold this lack of cylinders against it too much. It's still a mighty fine engine, producing chunks more torque than the 4.5-litre in the outgoing 645i, as well as a useful extra 34bhp.

To my eyes the 6-series is still the best looking car BMW currently produces, and this classy look has been further enhanced with the introduction of a 'Sport' package, available across all variants of the Six range, including the Gaudi-influenced convertible. Sport models cost approximately £2000 extra, for which you get unique multi-spoke 19in wheels, an M Sport steering wheel and sports seats, plus some rather tasteless dark wood trimmings scattered around the cockpit.

The driving experience continues to be heavily influenced by what other options you choose, though. For example, our test 650i had the standard steering rack fitted, which is a dramatic improvement over the clever-but-flawed Active Steering option we had on our long-term 645i.

The new engine delivers the goods big time. It has to be one of the smoothest V8s in existence, but it also dispenses tyre-challenging torque from the off (60 arrives in little more than five seconds), before a metallic snarl emerges as the redline approaches. Helping to keep things refined at higher speeds is the galactic 35mph/1000rpm achieved in sixth gear on the auto 'box (a six-speed manual is an option).

That's the good news. The bad news is that it's hard to escape the conclusion that despite all this performance potential, the 6-series is simply not a car that encourages you to hustle it in the first place. If you consider the raw ingredients - that mighty V8 engine, the rear-wheel drive and the BMW pedigree - it should result in a truly compelling driving machine, but somehow it doesn't. It's hard to fathom why. Perhaps it's because the 6-series has morphed into BMW's flagship techno-wagon, to the point where that vital spark of driver appeal that has kept BMW owners coming back for more has been overlooked.

If BMW is serious about creating the ultimate driving machines, perhaps its engineers would be better put to use developing a traction-enhancing slippy diff or tactile paddle-shifts behind the wheel for the auto gearbox instead of programming endless new screen updates for the infuriating iDrive, or creating this year's most pointless piece of new technology ('high beam assist', which is meant to dip the headlights for you as cars come towards you but ends up dipping the lights whenever it spots a reflective road sign, as well as not allowing full-beam to be used at speeds below 30mph).

With sales of the 6-series running behind expectations, next month's drive in the all-new Jaguar XK is going to be even more intriguing. Life could be about to get a whole lot tougher for BMW's elegant but ultimately rather bland coupe.