BMW 640i xDrive Gran Turismo review – charming, but not thrilling

The 6-series name might not be applied to BMW coupés any more, but the 6 GT is still typically luxurious 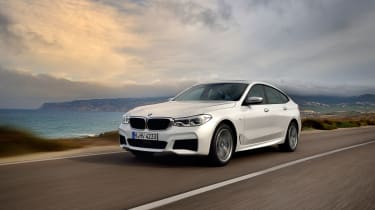 In the not so distant past BMW's 6-series models were sleek, elegant coupés designed to be part sports car, part gran tourer. But after a reshuffle of BMW's naming convention, such tasks will be taken up by the new 8-series that’s set to be launched early next year.

Instead of letting the 6-series name die, however, BMW has given the title to the replacement for the 5-series GT – the tall-bodied, five-door, five-seater that's neither a saloon nor a coupe – and so now we have the 6-series Gran Turismo.

To suit the 6-series title, the GT is sleeker than its predecessor with a 64mm lower roofline and looks that could, if you caught a glimpse of it out of the corner of your eye, convince you it is an actual coupé. 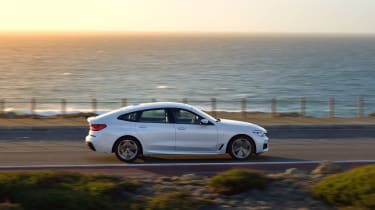 If you're only slightly familiar with BMW's current set of drivetrains you'll be able to guess exactly what lies beneath the body of the 640i xDrive. Its engine is the same straight-six that you’ll find in other '40i BMWs. It diplaces 2998cc and has a single twin-scroll turbocharger to help push max power to 335bhp and torque to 332lb ft.

It’s then paired with a ZF eight-speed automatic gearbox and, as the xDrive part of the name suggests, four-wheel drive.

The 6-series GT’s architecture borrows elements from both the new 5-series and current 7-series models. It uses the same double-wishbone front axle as those models and has the same width and wheelbase as a 7-series, while the multi-link back axle with air springs is taken from the new 5-series Touring. The structure between the axles is bespoke to the 6 GT. 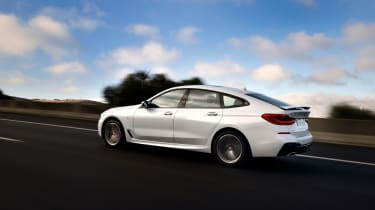 Rather than using the 7’s carbonfibre components in the body, the 6 GT is closer to the 5. That means lots of aluminium and high strength steel to make a stiff body, but one that doesn't weigh the same as a small planet. As a result, the 640i GT weighs 1720kg - hardly an insignificant figure, it’s 150kg more than the current 5 series, but it's a touch less than the old 5 GT – 150kg to be exact.

The 5- and 7-series underpinnings are immediately apparent from behind the wheel of the 640i. Not only do you have a new 5-series dash right in front of you, but the incredible refinement, sense of solidity and aura of calmness that pervades big modern BMWs is also obvious in the GT.

A lot of the Gran Turismo’s sophistication comes from the smoothness of its straight-six. Although we’ve experienced BMW’s same 3-litre B58 engine in other cars, namely the 440i and M240i, it has never felt as serene and as quiet as it has in the Gran Turismo. It’s almost silent, but when you do hear it rev, the noise is deep and cultured with none of the growl or bark that the engine emits when in the coupes. On the smooth Portuguese roads we tried the Gran Turismo on, the ride was very relaxing too. 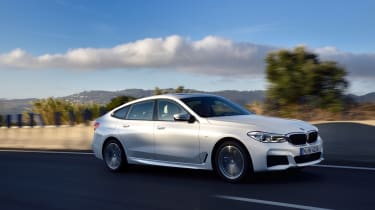 Such luxury doesn’t usually go hand in hand with driving thrills, and that’s still the case with the 640i. It feels ponderous as you try to feed it around corners at any reasonable pace; the steering is light and indistinct, the body rolls and the brakes do not inspire confidence, especially down hill.

What’s most disappointing, though, is how slow it feels. Accelerate at the apex and, although what does happen is immediate if you’ve selected the right gear, there’s hardly any shove forwards. In the dry there really isn’t any need to worry about traction, even if you’re overzealous with throttle. You certainly don’t feel the need for four-wheel drive.

In its defense, nothing about the Gran Turismo encourages you to drive in a spirited or sporty manner. You have to make a conscious effort to break out of the grown-up attitude that takes over you when you’re driving the 640i to experience its not-so-impressive side.

The 6 GT's odd shape means it has no obvious or clear rivals. Not even Audi or Mercedes, both of which make lots of niche models too, have followed suit and created a direct alternative. The closest would likely be the Audi A7 Sportback, but even though it has a hatch back, its low roofline makes it more like an ordinary saloon than the 6 GT. 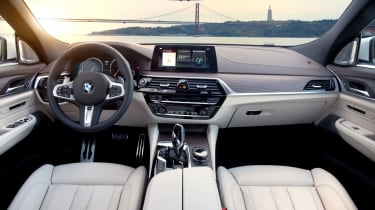 The 6-series biggest rival is from within BMW, and that’s the 5-series. The 6 GT offers more leg room than the conventional saloon and an even bigger boot than the Touring’s – although the more square-shaped space in the estate is likely to be more practical. However, both the 5-series saloon and estate are more entertaining to drive, and, to our eyes better looking. The final nail on the coffin for the 6, is that the 540i is £6500 cheaper too.