It would seem that it’s all about finding niches to fill these days and one look at the current BMW, Mercedes-Benz and Audi line-ups ably demonstrates this. These not-quite-core models are sometimes derided and BMW’s 5-series GT was one such machine. So it may have come as something of a surprise that it’s reimagined the model and moved it a little further upmarket with a 6-series moniker.

In truth it’s not really aimed at UK buyers – China and South Korea combined will take almost half of all 6 GT production during its lifespan – with the UK accounting for just four per cent of sales. It deserves to do better than that over here though as it offers more space than a 5 Series Touring – especially in the rear – has plenty of luxury trappings and isn’t a bad steer by any means.

Longer, lower and sleeker than before it’s still not as easy on the eye as an Audi A7 Sportback but it offers more than the A7 in terms of accommodation and standard equipment. Three engine options are offered on the 6 GT – two petrols and one diesel – and it’s this latter model, the 630d GT that is the pick of the bunch, with the 3-litre mill having more than enough urge to propel the GT’s occupants rapidly while being cossetted in its luxurious cabin. 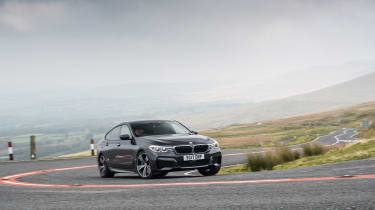 Performance and 0-60 time > The stand out performer is the 640i xDrive with its four-wheel drive assisting its 5.3sec 0-62mph, impressive for a nigh-on two-ton machine.

Engine and gearbox > Three turbocharged engines are offered – a 2-litre four-cylinder petrol (630i), a 3-litre six-pot petrol (640i xDrive) and a 3-litre six-cylinder diesel (530d) – and all are equipped with the excellent eight-speed ZF auto.

Ride and handling > Make no mistake the 6 GT is a big, heavy car but it can still be hustled along pretty effectively and seems to share its dynamic DNA with the 5-series rather than the 7-series. Adaptive suspension endows a ride expected of a car with a GT moniker.

MPG and running costs > Official figures range from 35.3 to 55.3mpg (640i xDrive and 530d respectively) with the 630i sitting in between. Subtract a ten from those for real world expectations.

Design > Beauty is in the eye of the beholder but the 6 GT is much improved over the 5-series GT and it hides its bulk very well when viewed on the road. In the flesh there’s some nice detailing, too.

Prices for the new 6-series GT start at £46,810 for the 630i SE and rise to £57,570 for the current range-topping 640i xDrive M Sport with the 630d costing around £1200 less than the equivalent 640i model. For the UK market the 630i is only available with rear-wheel drive, the 640i can only be had as an all-wheel drive xDrive model while the expected best seller, the 630d, can be optioned with either drivetrain.

Fortunately, BMW has moved away from its overly complex trim structure and has dropped the slow selling Luxury (and banished the horrendous, but short-lived, Urban trim to the history books) and GT buyers now have a simple choice; SE or M Sport, and BMW UK expects 80-85 per cent of buyers to opt for the latter. 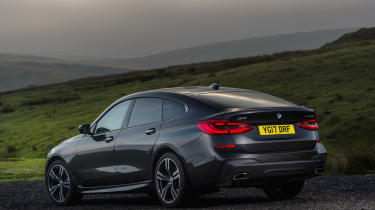 Options include several packages – M Sport Plus, Premium, Rear Seat Comfort and Technology – and just about anything that can be fitted to a 7-series can also be added to a 6 GT. If you were so inclined you could have a Head-Up display, Gesture Control, Massage seats, Ambient (scented) air, WiFi hotspot and a host of driver assistance items and the 7-series’ remote key-operated parking gizmo, too.

Such is BMW’s penchant for filling niches that some of the most compelling alternatives to the 6 GT come from within its own stable. The 5 Series Touring costs £4000 less in 530d guise but misses out on the 630d GT’s fully electric front seats and adaptive LED headlights and the traditional estate isn’t as roomy either with a smaller (by 40 litres with the seats up) boot and has less rear legroom, too.

The soon to be replaced 6-series Gran Coupe is a less practical but more stylish alternative although it’s considerably pricier and far less commodious. The 6-series GT could also be viewed as a cut-price 7-series if the more expensive car’s additional fripperies aren’t important and it’s worth noting that the GT has the same amount of rear legroom and a bigger boot – and in 630d M Sport guise is a whopping £14k cheaper than a 730d M Sport. 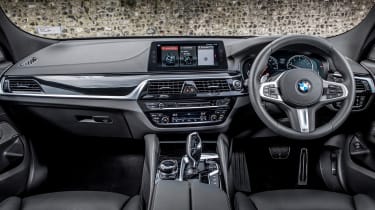 The closest rival to the 6 GT is Audi’s aging A7 Sportback, although a replacement is a matter of weeks away. It’s not as commodious as the 6 GT with the BMW having a larger boot and while BMW has stepped up its game in terms of interior design the Audi is still a very decent space to while away the time. In M Sport/S Line guises the equivalent 3.0TDI Audi is marginally (circa £1400) more expensive and has less standard equipment, but counters by being slightly faster that the 630d M Sport.

Mercedes’ offering is the, again ageing, CLS and while the Coupe is more in line with the 6-series Gran Coupe the Shooting Brake offers the sort of practicalities that the 6 GT and A7 major on. Despite its nigh-on five-metre length the Shooting Brake can’t match the BMW for space – it’s boot is smaller and with a wheelbase that’s 200mm shorter it’s no surprise the BMW has it beaten in terms of rear legroom, too.