The 6 GT shares its platform with both the 5- and 7-series, although the GT uses the longer car’s architecture and shares its wheelbase with the Seven. Up front there are double wishbones while at the rear there’s a multi-link set up and self-levelling air suspension and ride quality can be adjusted between Comfort, Adaptive and Sport. Both our test cars were equipped with optional (at a hefty £1670) Adaptive twin axle air suspension and while it certainly assisted the GT in riding very well over a wide range of surfaces we would like to sample a car on the standard set up to confirm its ride credentials.

The 6-series GT is a big car but the use of aluminium and high-tensile steel has kept kerb weight down, despite it not featuring the 7-series’ carbon core. At 1900kg the 630d GT (rear-wheel drive) is a healthy 115kg less than the old 5-series GT and only 75kg more than the equivalent 530d Touring and on UK roads the 630d GT felt closer to a Five than a Seven when it came to driving dynamics.

If you bear in mind that it’s never going to feel like an M3 on the back roads the 530d can be hustled along very effectively, turning in well unless you’re overly ambitious while the 3-litre diesel’s decent slug of torque punches it out of corners with some pace. The diesel’s more impressive than the 640i petrol in this regard, feeling fleeter of foot on the move and less strained getting back up to speed. 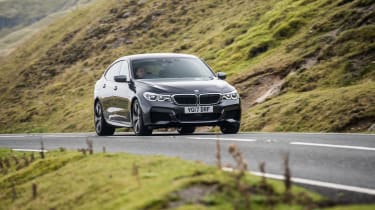 Neither model has what you would call inspiring steering – you can place the GT accurately enough but there’s not much in the way of feedback, but it’s unlikely to be a stumbling block for most buyers. The 640i tested was equipped with BMW’s Integral Active Steering and while it’s much less intrusive than it used to be we wouldn’t option it unless all our driving was going to be in town where its quicker slow-speed reflexes come in handy.

The M Sport models we tested come as standard with BMW’s M Sport braking system – larger discs and four-piston front calipers – and these proved more than man enough to repeatedly haul nigh on two-tons down to appropriate cornering speeds although the pedal isn’t desperately feelsome.

'Such luxury doesn’t usually go hand in hand with driving thrills, and that’s still the case with the 640i. It feels ponderous as you try to feed it around corners at any reasonable pace; the steering is light and indistinct, the body rolls and the brakes do not inspire confidence, especially down hill.'