We review the new 174mph Jaguar XFR Speed Pack. Is the faster options pack worth spending your money on? 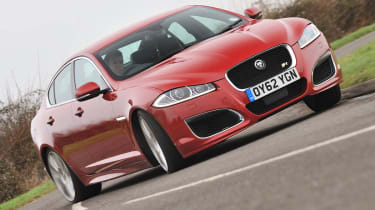 What is it? The Jaguar XFR Speed Pack, the BMW M5-rivaling supersaloon with its maximum velocity lifted from 155 to 174mph. The option pack costs £2750. Technical highlights? Not that its name suggests it, but there’s more to the Speed Pack than simply, er, speed. For starters it has a more assertive look thanks to revised aerodynamic addenda to aid stability at its elevated new VMAX. The new front splitter and rear wing don’t go to the excesses of the recently unveiled XFR-S, but they do inject a bit more attitude into the already handsome and distinctive saloon’s styling. Indeed this could be the optimum XF, at least in terms of looks.

Jaguar also claims the suspension has received some mild tweaks, but you wouldn’t know it from the driver’s seat. The engine is no more powerful than the regular XFR at 503bhp and 461lb ft of torque, but it doesn’t exactly want for performance so that’s no hardship. Unless your day-to-day wheels are a McLaren MP4-12C you wouldn’t think the XFR tardy.

The biggest change in the car’s character is not due to the Speed Pack, but actually thanks to the addition of ZF’s eight-speed automatic transmission to the XFR for the 2013 model year. Compared to the old six-speeder the XFR has plenty of added zip and sweeter, more responsive up and downshifts.

With all that supercharged torque the 5-litre V8 was always adept at bridging ratios, but now it’s always in the meatiest part of the torque curve, so the shove in your back is always immediate and impressive. You also get Intelligent Stop/Start, so you’re not burning through quite so much petrol (officially it contributes to an 11 per cent reduction in the EU Combined figure), but the Jag remains a thirsty beast.

If there’s a downside it’s that it makes progress feel quite busy, and there are simply too many gears to work through when you’re using the paddle shifters. I’ve generally lost interest by sixth, and it feels faintly absurd to have another two gears to go. Braking from speed into a tight corner has you batting on the left paddle like a Morse Code operator. That’s not a particular criticism of the Jaguar as the same is true in any of the other eight-speed equipped cars we’ve driven lately.

Is the Speed Pack worth having? If you only drive in the UK and don’t stand in the pub telling people how fast your car is then almost certainly not. But if you drive in Europe, and more specifically Germany, I’d suggest £2750 would be a small price to pay for the pleasure of annoying BMW M5 and Mercedes E63 AMG drivers on the autobahn.Anything else I need to know?

If it’s an XFR with more power you crave, then Jaguar’s new XFR-S gets the same 542bhp V8 as its aggressive XKR-S cousin while the electronic speed limiter sits even higher than this car’s, at 186mph. You’ll pay £79,995 for the privilege – a big hike over the £68,130 XFR Speed Pack.