The Jaguar XFR-S has been officially unveiled at the 2012 LA motor show, with the highlights including 542bhp and a 186mph top speed 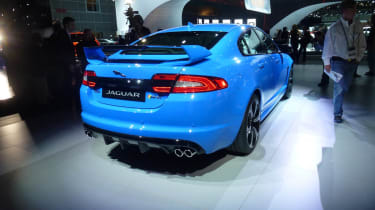 The Jaguar XFR-S saloon has been officially unveiled. Long rumoured and oft photographed in disguise, it’s been an open secret for a long time. The wraps have been pulled off at the 2012 Los Angeles motor show, and it’s an unsubtly styled rival to the BMW M5 and Mercedes CLS63 AMG. As predicted, power comes from the XKR-S coupe’s 5-litre supercharged V8, meaning 542bhp and 501lb ft of torque – respective climbs of 39bhp and 40lb ft over the standard XFR. That means a swifter 0-60mph time, down from 4.7 to 4.4sec, while the top speed’s electronic limiter has been raised from 155mph to 186mph.  In our experience, though, Jaguar limiters can be a bit soft, making 190mph-plus a possibility. That would mean eclipsing the BMW M5 equipped with its M Driver’s Package.

The extra power over the regular XFR and XKR’s 5-litre V8 engine is provided by improved airflow and a new exhaust system, the latter also cranking up the noise levels and an intake symposer feeding extra sound into the cabin. Power is sent to the rear wheels via an eight-speed automatic gearbox, which incorporates stop/start technology. To handle the extra power, the suspension has been comprehensively reworked, with firmer springs and stiffer adaptive dampers. Some of the work has been inspired by the development of the new F-type sports car, with overall lateral stiffness up by around 30 per cent. The electronic differential and stability control systems have also been revised, the latter gaining a more lenient ‘Trac DSC’ mode. More immediately noticeable are the new 20in alloy wheels and bold aerodynamics kit, which is topped off with a very large rear wing. It boasts carbonfibre construction and a claimed 68 per cent cut in rear lift over an XFR. A smaller, subtler version is an option, though. The Jaguar XFR-S goes on sale in May 2013. It will cost £79,995; that’s nearly £15,000 more than a standard XFR, and £7000 more than the BMW M5 that sits in its crosshairs. It should be a scintillating battle.