A weekend trip to France leaves our Jaguar XFR completely unfazed. It's the perfect vehicle for long hauls 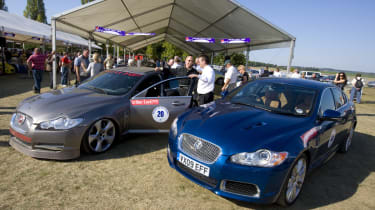 A weekend in France. Or more precisely a Weekend de l’Excellence Automobile. Think of it as the Festival of Speed crated up, sent a couple of hundred miles south to the genteel Champagne region and let out to play amongst the faded grandeur of the historic Reims-Gueux circuit.

A rendezvous with another XFR awaits, but first we have to cross the vast agricultural plains of northern France, possibly one of the most tediously monotonous landscapes known to man. Well, this man at least. One hundred and eighty miles from Calais to Reims broken up by two péages, the interestingly titled Vallee de l’Aa, a sneaky speed trap and almost nothing else. Most cars slump with weariness on the A26, but not the XFR – it goes everywhere with a spring in its step, undaunted by distance, entirely content to cruise. I know of no car better able to take the sting out of France’s northern territory.

And that’s despite it having radar cruise control – one of my pet hates. The sensor could be disabled and the system used conventionally in the Lexus IS-F I used to run, but not here. I could turn off the cruise altogether, but then I might succumb to temptation, bury the throttle and land myself in a spot of bother with Le Filth.

As it happens, the next day I do get caught by a speed gun – and at 132mph to boot. I have once spent the night in a French cell for a similar crime, but this time there’s no fine, no confiscated licence, no late-night despair. Nope, the local gendarmes who have closed the public roads that make up the 4.4-mile circuit thought it might be a laugh to bring along their radar gun.

To be honest the XFR Bonneville I was piloting at the time could have gone a fair bit quicker. After all, it managed 225mph on the salt flats that it is named after. The only engine mods over my XFR are a modified ECU, faster supercharger, tweaked exhausts and – my favourite feature – a removable Growler badge behind which is a crude but effective ram-air intake.

So, 600bhp with which to please the crowds. I will admit to a little trepidation as we line up on the grid.  I have a horrible habit of fiddling with things I’m not meant to and the parachute lever is handily placed and painted bright red. It’s also blatantly obvious that a car set up for straight-line running isn’t designed to cope with the eight chicanes that have been installed to prevent chumps like me reaching terminal velocity.

The tyres scuff the arches, the V8 bellows through the open window giving the scene a Nascar vibe, and I’m lapping with D-Types, Cooper F1 cars, an XJR-9… It’s quite surreal and utterly brilliant. The Bonneville’s friendly, too; almost as serene as the standard car, crisp and planted through the circuit’s few bends, but notably faster and far, far rortier. I spend much of the afternoon wondering if my XFR could somehow produce a similar soundtrack. Surely there’s some room for improvement…