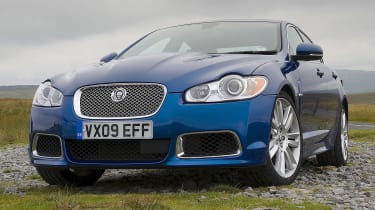 There’s an orange screen between the Jag’s two dials. Well, it’s not actually, it’s black and white, but it glows orange whenever the car needs to tell me something that Just Can’t Wait. Of late this has been that the first service is due (in around 1100 miles), but there’s been another, less ignorable message: a warning that there’s a fault with the Adaptive Dynamics system. This one is less frequent, but it’s accompanied by the car jamming itself in the sportier of its two modes. This is my preferred setting anyway, so it’s not a huge problem, but I’ll get it looked at when the car goes for its service.

The screen also turns tangerine when fuel gets low. This doesn’t happen quite as often as you might expect – I tend to get about 300 miles from a tankful, averaging 22-23mpg on the trawl to work and back, although this drops dramatically if the Brackley roundabouts are quiet and I’ve remembered to press and h-o-l-d the DSC button.

The XFR drifts as effortlessly as snow; big lazy arcs, the car seemingly held at an angle by two-ton momentum alone and yet so controllable, so precise, so catchable. And so hard to resist nailing it all the way through second and third along the next straight. The XFR may find itself bathing in the soft orange glow of a petrol station forecourt sooner as a result, but it’s so worth it.