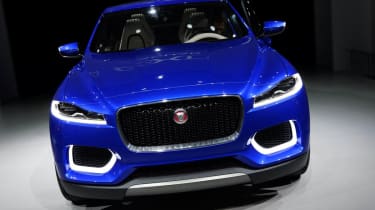 The 2013 Frankfurt motor show has yielded plenty of new performance cars and concepts worthy of discussion. Our video review below - filmed live at the show with four of evo's key staff - sums up what's most interesting, what was sexiest and what we're most excited to drive in the coming years.

Among the biggest talking points have been the new Jaguar SUV, dubbed C-X17, Caterham’s new cut-price Seven model and the extreme 597bhp Ferrari 458 Speciale. The fastest factory Golf ever produced, the Mk7 VW Golf R, debuted in the big VW hall alongside the super economical (and super expensive) XL1. Audi, which dominates at Frankfurt thanks to a colossal building erected a couple of months before each show, unveiled a new, hybrid Quattro Concept – which might see production this time with as much as 700bhp. We'd seen this a few weeks before Frankfurt, but more of a surprise was Audi's mad SUV-supercar Nanuk Quattro concept car.

BMW's bespoke hall contained the production-spec, undisguised i8 hybrid sports car – two years after the event the concept was first revealed - as well as its smaller i3 sibling and the new X5. The new M4 concept, which has just been unveiled at Pebble Beach, has been absent at Frankfurt, suggesting its major motor show debut will be later in the year, perhaps at Tokyo or LA. Bugatti has shown a new Jean Bugatti edition Veyron, which follows on from the Wimille edition. Bentley will also show its new Continental GT V8 S model.

Porsche’s 918 Spyder finally made its European debut in production form, following the recent showing in Monterey. There will also be a 911 50th anniversary special edition. Other cool concepts include the Volvo Coupe, which heralds the start of a new era for the company thanks to an all-new architecture, Infiniti’s Q30 premium hatchback and the ‘almost production ready’ Mini Vision concept. Bugatti has revealed yet another new special eition Veyron, called the 'Jean Bugatti'.

Mercedes has shown off the new S63 AMG, as well as the A-class-based compact crossover GLA, which an AMG version will be spun off in due course. There was also an appearance from a new S-Class Coupe concept car. Peugeot has revealed its latest hot hatch in concept form, the new 308 R, which will rival the facelifted Renaultsport Megane. Toyota will show a new hybrid Yaris, but this one has a 400bhp drivetrain...

A full A-Z list of Frankfurt motor show news is below...