BMW has revealed a new X5 hybrid concept car, called the eDrive, which will be unveiled at the Frankfurt motor show 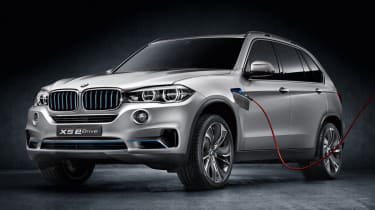 BMW has revealed pictures and details of a new plug-in hybrid X5 concept car, called the eDrive, ahead of its launch at the Frankfurt motor show next month.

Key figures include an average fuel consumption figure of 74.3mpg, and a range of up to 19 miles in electric-only mode. BMW also says that the eDrive can reach speeds of 75mph in electric mode. CO2 figures are said to be less than 90g/km.

With a plug socket located on the front wing, the battery can be charged from any domestic power socket, or quick charge points. Although the main intention is to boost economy and lower emissions, BMW say that the electric motor is also used during acceleration, giving a 0-62mph time of under 7.0secs.

The exterior of the X5 has been slightly modified to increase aerodynamic efficiency and many of the details including grille slats are finished in the BMW i Blue colour.