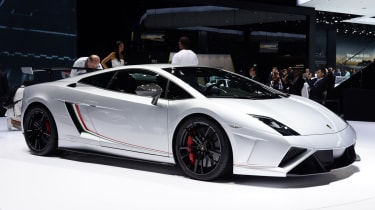 Lamborghini has revealed the race-inspired LP 570-4 Squadra Corse at the Frankfurt motor show. This could well be the could be the final special edition Gallardo, as Lamborghini says that it will be the last time we will see a Gallardo at a major motor show – with baby Lambo replacement expected in the

Power output remains unchanged from the regular Gallardo Superleggera or Performante models at 570bhp, but the car features a number of upgrades that are either taken directly from the Super Trofeo racer, or inspired by it – with the aim of creating a road-legal race car.

The rear wing is taken directly from the race car, and is said to produce three times the downforce of the standard Gallardo. Both the quick-release engine cover and rear wing are made from carbon fibre. All the weight-saving measures in the Squadra Corse add up to a dry weight of 1340kg: 70kg less than the regular car, and the same as the Superleggera.

Performance is also around the same, with a 0-62mph in 3.4secs, with a slightly lower 198mph top speed due to the extra drag of the wing. Like the Super Trofeo, the Squadra Corse is fitted with the six-speed semi-automatic e-gear transmission, and four-wheel drive.

Inside, the model is trimmed with a mixture of red and black alcantara, as well as extensive use of carbon fibre – to add to the competition car feel. It can be ordered in yellow, white, grey or red and can be identified by the ‘tricolore’ stripes on the side.