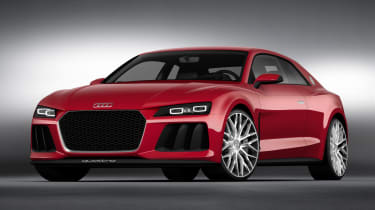 Audi has revealed pictures and details of a mildly updated version of its Sport Quattro concept car, called the Laserlight. The model looks more production-ready than previous concepts, and is set to go on show at the US Consumer Electronics Show on 6 January.

It will be shown at the technology-driven show due to the highly advanced computer and lighting features. The headlights boast new laser technology, hence the name, combined with Audi's already well-established Matrix LED technology. Allowing light output more than two times as powerful as LED alone, Audi says the laser technology be used for the first time on this year’s R18 Le Mans car.

The Audi Sport Quattro concept was first unveiled at the 2013 Frankfurt motor show. Despite sitting beside the utterly nuts Nanuk Quattro concept on Audi's glimmering show stand, the Sport Quattro still hauled in the crowds thanks to its much higher production feasibility and, perhaps, its eye-grabbing yellow paint.

A Quattro concept was first shown three years ago at the Paris motor show, but it has been updated inside and out and brought much closer to production spec. Audi is yet to commit to production, but a small number of Sport Quattros in a limited run is highly likely. Expect a priced higher than Audi’s current range topper, the £128,710 R8 V10 Plus, to make this the brand's most expensive model.

Audi recently released this video of the Sport Quattro model driving, to celebrate the company hitting a milestone 100,000 Likes on Facebook. It's the first time we've seen this incarnation of the concept in action:

The latest Sport Quattro looks similar in shape to its 2010 precursor, but its styling details are far more honed. The front bonnet intake is gone, replaced with side intakes behind the front arches, while the head and taillights have morphed into more production-ready units with the front lights eschewing covers to save weight. Less than you’d add by wearing a thick jacket though, we imagine. Other weight saving measures include the use of carbonfibre reinforced plastic (CFRP) for the front splitter, rear diffuser, side sills and rear light mounts. The interior is also quite minimalist. The alloy wheels are 21in in size and cover carbon-ceramic brake discs. All the weight saving seems pivotal to help counteract the Sport Quattro’s complex drivetrain, all four wheels driven by a plug-in hybrid setup. A 552bhp/516lb ft 4-litre twin-turbo V8 petrol engine – as seen in the Audi RS6 and RS7 – is mated to a 110kW/295lb ft electric motor, which is powered by a rear-mounted lithium-ion battery. Total power is rated just shy of 700bhp, at a Lamborghini Aventador matching 690bhp, which would comfortably make this Audi’s most powerful road car should it make production as we hope (and expect!)