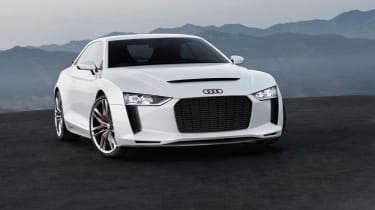 30 years after it unveiled the original Quattro at the Geneva Motor Show, Audi has taken the wraps off this fantastic ‘quattro Concept’ (little ‘q’  according to the press pack).

It is based on the RS5, but has a 150mm shorter wheelbase and a 40mm lower roofline. The RS5’s V8 has also been ditched for an uprated version of the TT RS’s turbocharged five cylinder, which we know provides a wonderfully authentic soundtrack. The latest iteration of quattro four-wheel drive system with a crown gear centre differential is obviously present and it’s combined with the excellent sport differential first seen on the current S4 and a six-speed manual gearbox.

The body is mostly made from aluminium, but the bonnet and boot are made from carbonfibre which helps keep the weight down to an impressive 1300kg (some 150kg lighter than a TT RS). Combine this kerb weight with the massaged engine producing 402bhp between 5,400 and 6,500rpm, and 354lb ft of torque from 1,600 to 5,300rpm, and you have a car capable of sprinting from 0-62mph in 3.9 seconds. Braking is by six piston callipers on carbon ceramic discs.

Highlights of the Col de Turini white exterior include extremely muscular C-pillars that hark back to the Ur-Quattro and 20in centre-locking wheels that don’t hark back to the Ur-Quattro. Inside the two seater there are lightweight bucket seats, which weigh 18kg each. The MMI also has a rather unique function – in Race mode it will, apparently, display co-driver style pace notes about the route ahead…

Although only a concept, an Audi Spokesman said that he thought it extremely likely that there would be a limited production run in the vein of the R8 GT. We absolutely can’t wait.

UK firm SB Motorsport is shoehorning the powertrain from a Nissan GT-R under the body of a Navara, and progress is coming along nicely
Visit/mclaren/203132/mclaren-765lt-2020-review-latest-long-tail-returns-to-reset-the-status-quo

McLaren’s latest Long Tail fulfills its brief in once again pushing the supercar to the next level, the 765LT just has to prove its magic on the road …
Visit/lexus/lc500/convertible