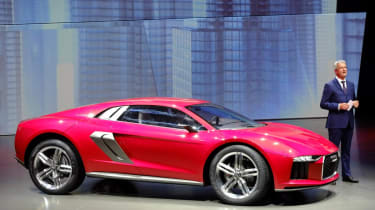 Audi has revealed a 536bhp concept car at the Frankfurt motor show. Called the Nanuk Quattro concept, the coupe crossover ‘combines the dynamics of a high-performance sports car with Audi's Quattro expertise on the road, on the race track and also off-road’.

Powered by a mighty new V10 TDI engine, the substantial powerplant is mounted longitudinally in the centre of the car – like the R8. In total, the Nanuk weighs 1900kg, with power distributed to all four wheels via a seven-speed S-Tronic automatic gearbox.

It produces 536bhp, and 737lb ft, which should be enough to propel the Nanuk Quattro to 62mph in 3.8secs and onto a top speed of 189mph. A new thermal management system, with ‘separate cooling loops’ and a ‘steplessly regulated oil pump’ helping to provide fuel consumption of around 36.0mpg.

The Nanuk has been designed in collaboration with Italdesign Giugiaro (which is owned by Audi), and features an aluminium spaceframe, wrapped in a carbonfibre-reinforced polymer body. A set of 22in wheels completes the package.

All-round double-wishbone suspension is specified, along with adaptive air suspension and electronically controlled dampers. There are three height settings to choose from, which are automatically selected depending on terrain.