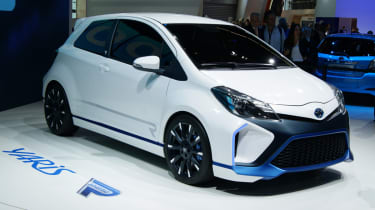 Toyota has fully revealed the new Yaris Hybrid-R concept car at the Frankfurt motor show. The hot hatch Yaris boasts a total power output of 414bhp, thanks to a race-derived petrol-electric drivetrain.

Developed by Toyota Motorsport GmbH, the 1.6-litre global racing engine features direct injection, and a single Garett turbo, to produce 296bhp on its own. A pair of 59bhp electric motors drive the rear wheels, bringing the total power output up to 414bhp.

Rather than using a conventional battery pack, the Yaris uses a ‘super capacitor’ originally developed for the Toyota TS030 Le Mans racer. This allows a higher power density, and much quicker charge and discharge speed, suited to track driving.

A third electric motor sits between the gearbox and rear motors, and acts as a regenerative braking system for the capacitor. In instances where the front end runs out of grip, the third motor can also send power directly to the rear motors. The whole system works in tandem, and acts in the same way as torque vectoring differential, to increase the overall cornering speeds.

It is also fitted with a set of 18-inch TRD wheels, which appear to be the same as those on the recently-launched GT86 TRD special edition, and a set of Michelin Pilot Sport Cup tyres. The new front bumper features larger openings for increased brake cooling.