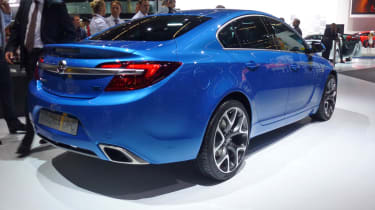 Vauxhall’s new 170mph Insignia VXR SuperSport has been revealed at the Frankfurt motor show, along with the rest of the Insignia range. The VXR was first launched in 2009, and this updated model is the cheapest it has ever been, with prices starting from £29,745.

Most obvious are the updated front and rear bumpers, including the much larger front grille with ‘saber-tooth’ detailing. The rear suspension has received the biggest change, with about 60 per cent of the components having been tweaked. Vauxhall’s front HiPerStrut set-up remains unchanged.

There is also a software update for the ESP, which is said to offer more precise handling, due to a reduction in understeer. This also includes new software for the adaptive ride system. Vauxhall also claims to have improved the overall refinement of the VXR.

The new model sees power remain at 321bhp, retaining the unlimited 170mph top speed. Good news for customers is that the base price for the high-performance model has actually been dropped to £29,745 for the saloon, knocking £150 off the list price. The Sports Tourer model starts from £31,049, with deliveries expected later this year.

The Insignia’s top speed is impressive, although it is important to remember that although it officially outguns many of the German Autobahn stormers, they are electronically limited to 155mph. This isn’t the fastest Vauxhall saloon ever though – the 377bhp Lotus Carlton still holds that honour, managing 176mph back in 1990. Other changes are slight, but the instruments now reach up to 170mph. The only other identifier to the car’s increased performance is the blue Brembo lettering on the brake calipers. The new model is already available to order.