The BMW i8 finally makes production debut as a 113mpg, 357bhp hybrid supercar at the 2013 Frankfurt show. Pictures and show video here 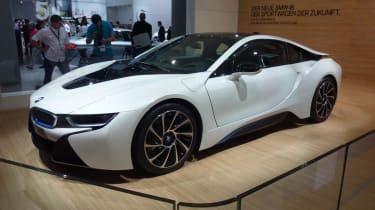 After years of concepts and teasing, we've finally seen the production version of the BMW i8. The second car in BMW's i electric range, and a supercar priced in the same ballpark as the Audi R8 and Porsche 911, it's a striking car. Though some of the concept's more distinctive features - such as the extensive use of glass on the doors - have sadly been lost in the translation from concept to production. Still, some of the detailing - especially at the rear, where aerodynamics have clearly played an influential role – is beguiling in person. A 129bhp electric motor drives the front axle, while a 228bhp three-cylinder 1.5-litre turbo petrol engine powers the rear wheels. The 357bhp combination of the two serves up a 0-60 time of 4.4sec, putting the i8 on par with a 4.2-litre V8-powered Audi R8. The top speed is electronically limited to 155mph, however. BMW also claims 113mpg fuel economy and 59g/km of CO2 emissions. For comparison, that R8 offers up 20mpg and 332g/km…

The small-cylinder engine and electric combination isn’t the sole reason for such low consumption and emission figures. The BMW i8 boasts lots of other impressive technology. Carbonfibre reinforced plastic (CFRP) features heavily in the car’s construction, so it weighs around the same as a family car at 1480kg. There’s also variable brake energy recuperation, a stop-start system and on-demand operation of the electric steering, air con and other features, saving energy use wherever possible. It should be good to drive, too, with 50:50 weight distribution, the BMW range’s lowest centre of gravity (less than 460mm, they say) and double wishbone front and multi-link rear suspension all aiding dynamics. Dynamic Damper Control comes as standard, allowing the i8's handling characteristics to be tweaked depending on how sporty or comfortable you want things to be. No price has yet been announced for the i8, but we're expecting a start price of around £100,000. Included on the tech-heavy options list are CFRP wheels (saving 3kg per corner over traditional alloys) and laser headlights, which are probably worth speccing for bragging rights alone.