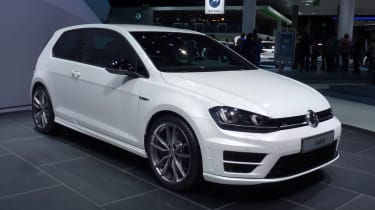 The new VW Golf R has been unveiled at the 2013 Frankfurt motor show. While the Volkswagen Golf is in its mk7 generation, this is the second generation Golf R, and fourth in line if you include the previous Golf R32 models. VW's Frankfurt show stand - covered in cars of all shapes and sizes - possessed both three and five door Golf Rs, in blue and white hues. The Golf may not have as much presence of more hardcore hot hatch rivals, but some of the detailing - including its glitzy alloy wheels and four exhaust tail pipes - is high quality.

The new Golf R shares its heart with the new Audi S3, a 296bhp, 280lb ft 2-litre turbocharged four-cylinder engine powering all four wheels via VW’s 4MOTION all-wheel-drive system. A fifth-generation Haldex setup, it decouples the rear axle under low load and when coasting, but with quick activation via an electro-hydraulic pump, almost 100 per cent of the power can go to the rear wheels when necessary. Sounds like a laugh when the snow comes along…

It's the fastest factory-spec Golf ever, completing 0-60 in less than five seconds thanks to its combination of turbo power and four-wheel-drive traction. The six-speed manual equipped car hits 62mph in 5.3sec, while the optional six-speed DSG twin-clutch paddleshift gearbox cuts this to 4.9sec.

VW is also keen to shout about its other numbers, too, with 39.8mpg fuel economy and 159g/km CO2 emissions, the latter on a par with a mk5 Golf TDI.

The Golf R rides 20mm lower than a standard Golf, and 5mm lower than a Golf GTI, getting its own specific spring and damper tuning. It gets the progressive steering setup seen on other fast Golfs, which tightens up the lock to increase agility.

It gets a similar look to previous Golf Rs, with a reasonably subtle bodykit (though one a little more shouty than the GTI’s), five-spoke alloy wheels and smoked rear lights, though it gets four exhaust tailpipes rather than the twin pipes of the mk6 Golf R. The 18in wheels shroud vented brake discs.

Expect the mk7 VW Golf R to possess a price similar to its Audi S3 relation, making it around £30,000.