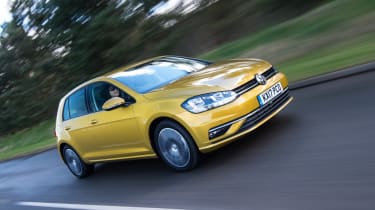 There are some cars that define the class in which they compete, having been the go-to choice for so long that it takes a conscious decision to go elsewhere. The Porsche 911 is one. The Ford Fiesta, Britain's best-selling car, is another. But arguably the model that best defines the class it sits in is the Volkswagen Golf.

Now in its seventh generation and having enjoyed a fairly comprehensive overhaul in the last couple of years, the Golf has been making customers' family car shortlists for decades, and for good reason. Perhaps most importantly, and down in no small part to the Golf itself, VW has made its cornerstone product aspirational, so while it might compete on a fairly even keel with the Ford Focus and Vauxhall Astras of the world, it's seen as more desirable right off the bat. It's as close as a car in this segment gets to being a classless car, feeling at home whether you're parking outside a flash restaurant or taking bags of waste to a recycling centre.

It also gets fairly close to nailing every other brief you'd expect of a car in this class. It's not adventurously-styled but it's certainly handsome, there are a wide range of models to appeal to most tastes and budgets, most models perform well, it's comfortable, spacious and classy inside, and as an added bonus, the desirability factor keeps depreciation low.

Is it perfect? Not from an evo perspective, as it doesn't quite fulfil our brief of being thrilling to drive, at least not until you start trading up to the GTIs and Golf Rs of the world, and even then we have preferences in the hot hatchback market. The Dieselgate scandal has also taken the shine of the more frugal models in the Golf range, fuel-efficient though those TDIs remain. But the Golf still engages enough that we'd be happy to recommend it if all you seek is practical family transport. 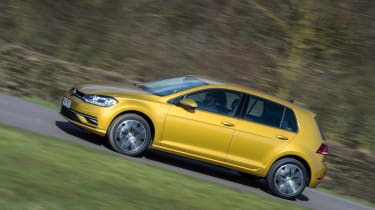 Performance and 0-60 time - VW can't curry favour with us by naming its 1.5-litre petrol "EVO" but it's the quickest petrol model short of the GTI, at 8.3sec to 62mph. Similarly-brisk diesels are available, while the GTE is quicker still.

Engine and gearbox - There's a huge range available, from 1-litre turbocharged triples to the potent GTIs and Rs, plus electric and plug-in hybrid versions. The pokier petrols are most fun, but most have merit.

Ride and handling - The Golf utilises a talented chassis and good traction. The results make carrying speed an enjoyable, yet comfortable experience.

MPG and running costs - The all-electric e-Golf, plug-in hybrid GTE (166mpg) and diesel-sipping 1.6 TDI (68.9mpg) are most efficient, but most Golf power units are frugal.

Interior and tech - Recent revisions have given higher-end Golfs a fancy Virtual Cockpit-style TFT screen for the driver, lending the Golf an even more upmarket feel than before. Perceived quality in the cabin is very good and the infotainment options easy to use.

Design - Gradual evolution has given the Golf a timeless appeal and the new model, while a little boring for some, will undoubtedly age very well indeed. It's one of the most handsome Golfs since the Mk1 and Mk2. 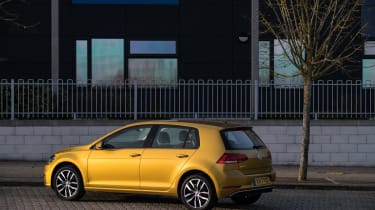 There’s some truth to the Golf being a touch more expensive than its mainstream rivals, but you really can see where your money has been spent. Its build quality inside is on a par with most premium hatchbacks, so it should be considered a rival for its Audi A3 cousin as much as it is for the SEAT Leon.

Family hatchback alternatives can be found far and wide. The most obvious contenders are the Ford Focus, Vauxhall Astra, Renault Megane and Peugeot 308, but the Japanese contingent of Honda Civic and Mazda 3 is well worth a look too (the Toyota Auris less so) while Korea fields its own challengers in the form of the Kia Ceed and Hyundai i30.

Move upmarket and you'll find the BMW 1-series and Mercedes-Benz A-class, and more space can be found from the Skoda Octavia - you really are spoiled for choice, though that the Golf is capable of tackling all of these in most areas is a mark of its talents.

Golf pricing begins at £18,340, though the rather breathless 84bhp 1.0-litre three-cylinder S you get as a result perhaps isn't the most desirable option, with its 15-inch steel wheels and basic cloth trim - though you still get air conditioning, a touchscreen media system and a host of safety features.

> VW Golf GTI vs GTE - is the hybrid hot hatch up to scratch?

SE models start at £19,620 and bring more power, more options and more kit, while an SE Nav (starting at £20,370) adds, as you may have guessed, satellite navigation. Sporty GT models begin at £23,405, though the 1.6 TDI you get at that price isn't the most engaging of power units, so the 1.5 TSI (just £145 more) or 2.0 TDI options are probably more appealing here. Extra kit includes unique alloy wheels and sports seats, but stops short of the Golf R-like styling of the R-Line, whose prices begin at £24,195. R-Line seats and a GTI-style steering wheel are the clearest visual indicators inside.

It's five-door only (five door adds £655 to other models), gets unique exterior styling with aero wheels and C-shaped LED lighting signatures, and features much of the standard kit of other high-end Golfs, such as LED headlights, the most feature-packed infotainment system, and adaptive cruise control.

After 35 million units there’s a new Volkswagen Golf, only this time under an increasingly large shadow
Visit/volkswagen/golf/21882/volkswagen-e-golf-review-traditional-hatch-to-take-on-tesla 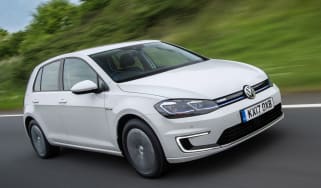 The e-Golf has all the pros of a Golf, yet all the cons of an electric car...
Visit/volkswagen/golf/21458/volkswagen-golf-r-power-reduced-due-to-new-wltp-regs 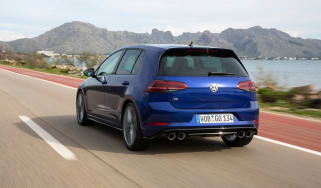 And adding insult to injury, the manual and three-door variants have been dropped too!
Visit/volkswagen/golf/19863/volkswagen-golf-15-tsi-evo-review-does-the-evo-engine-make-for-an-evo-car 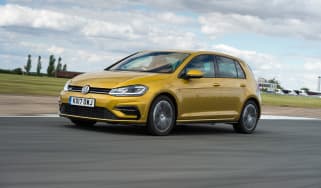 It’s the Golf you buy when you can’t afford a GTI. We reckon you should save up and spend the extra
Advertisement
Visit/volkswagen/golf/19235/2017-volkswagen-golf-gte-review-can-the-plug-in-hybrid-gte-be-considered-a 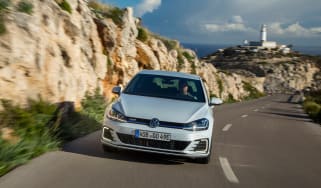 Refined and impressive, but not especially sporty
Visit/volkswagen/golf/13689/volkswagen-golf-gte-vw-reduces-price-of-plug-in-hatch 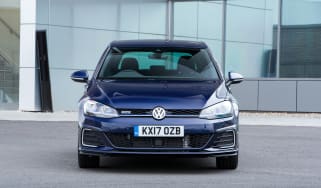 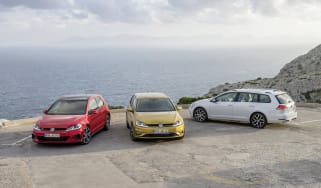 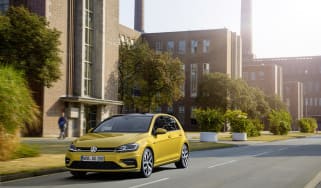 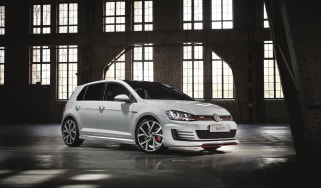 Prices start at £3995 for more aggressive styling and a fruity exhaust note from GTI, GTD and R models
Visit/volkswagen/golf/15975/volkswagen-golf-gte-sport-worthersee-hybrid-in-frankfurt 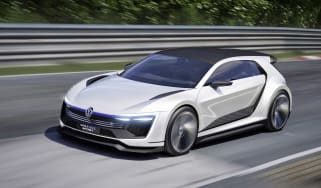 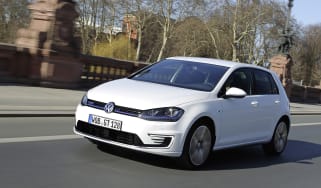 The theory? GTI driver appeal with 188mpg economy. Time to get to grips with reality...
Visit/volkswagen/golf/14684/jari-ketomaa-thrashes-prodrives-new-volkswagen-golf-scrc-video 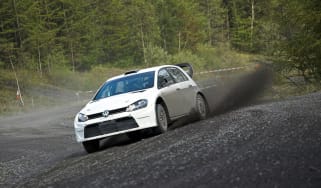 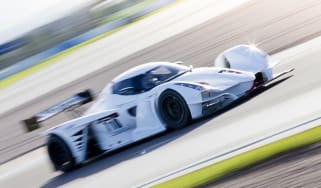 Henry Catchpole gets to drive the Praga R1 race car, which is powered by a 210bhp Renault engine. Video here
Visit/volkswagen/golf/13845/volkswagen-golf-gti-wolfsburg-edition-revealed 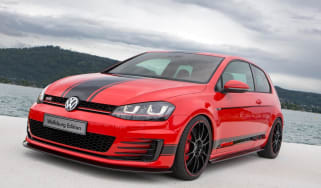 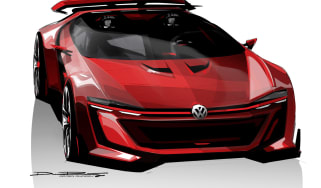 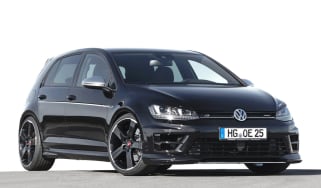 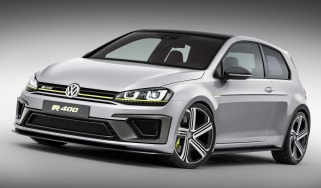 Full details and images of the new VW Golf R 400 have been revealed at the Beijing motor show
Visit/news/evonews/292081/evo_magazine_may_2014_best_hot_hatchbacks_ever.html 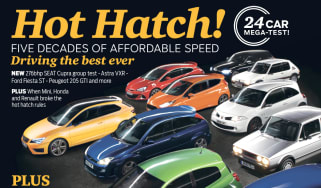 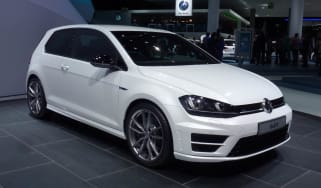 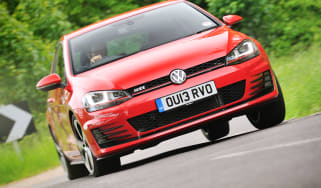 We drive the mk7 VW Golf GTI in basic trim without its Performance Pack. A hot hatch great?
Visit/volkswagen/golf/13290/vw-golf-r-cabriolet-price-cut 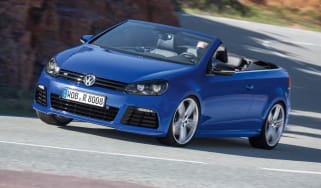 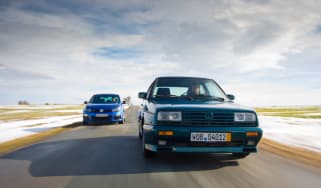 The 266bhp super-Golf recalls a rare homologation special, called the Rallye, designed to take on the Lancia Integrale. We bring the two together.
Advertisement
Visit/volkswagen/golf/6239/vw-golf-gti-mk5-buying-guide 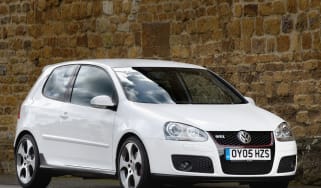 It marked a long-overdue return to form for VW’s hot hatch, and now you can find out just how brilliant it is for yourself for less than half the car’…
Visit/volkswagen/golf/13222/vw-golf-design-vision-gti-concept-more-pictures 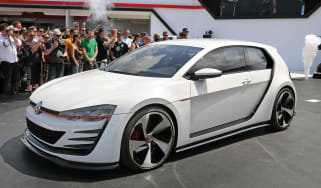