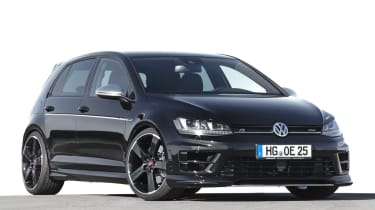 Renowned VW Group tuner Oettinger has squeezed even more power out of Volkswagen’s hottest hatch, the Mk7 Golf R. Having undergone extensive mechanical modifications, the fettled four-wheel drive R can slice the standard car’s 0-62mph dash by one second to under 4.0, and propel it onto a top speed of 174mph.

This added oomph owes itself to a larger turbocharger, full performance exhaust and remapped ECU, meaning that in its highest state of tune the Oettinger Golf R can put out 389bhp and 369lb ft of torque. The German tuner does also offer two slightly less hardcore levels of tuning, those still seeing the standard car’s 291bhp increased to 350bhp and 369bhp respectively.

Announcing the public unveiling of the two most potent kits at May’s Worthersee Volkswagen meeting, Oettinger confirmed the options of a new bodykit. This includes a front spoiler, rear diffuser, double roof spoiler, lightweight 19 or 20in alloys and racing brakes, adding aggression to what was a fairly understated standard exterior.

It’s true we loved the standard spec Golf R, with its ability to thrust you along at sports car pace without losing the touch of class and comfort you’d expect from a top of the range Golf. With such a substantial power hike however, the Oettinger Golf R could well be even more exciting.