Prices start at £3995 for more aggressive styling and a fruity exhaust note from GTI, GTD and R models 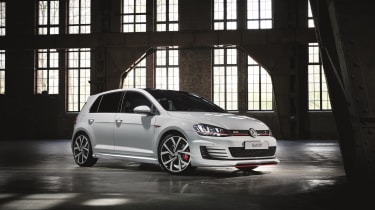 Volkswagen has teamed up with long-established German styling house Oettinger to offer a range of official body kits for the Golf range.

Those wishing for more visual clout from their Golf R, Golf GTI and Golf GTD models and have £3995 to set aside (or £5225 for the R) can now add the Oettinger styling when ordering their new car.

Front end styling can be altered with the fitment of a deeper front spoiler with integrated splitter, details matched by the inclusion of a diffuser element in the rear bumper and a prominent spoiler atop the tailgate. Side skirts are also part of the pack.

In addition, each kit comes with a new exhaust silencer unit with quad outlets, whose pipes prodtrude from between the fins of the diffuser.

As well as lending the rear of each car a more dramatic look (even if four tailpipes are perhaps overkill, particularly on the GTD...), VW says the new unit produces a sportier sound. The body kit, incidentally, has been honed in the wind tunnel, but you probably won't feel its effects on your daily commute.

As a factory-approved kit the fitment should at least be snug, and while it does give the Golf a slightly bottom-heavy look (at least in the images) it may answer calls from some for a little more visual distinction from the usually-understated models.