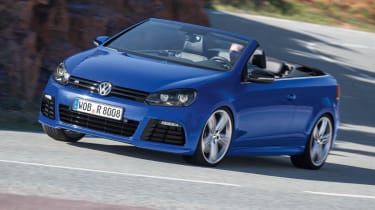 Volkswagen has boldly cut the price of its Golf R Cabriolet. The 261bhp convertible – which launched at the beginning of 2013 – entered the UK with a £38,770 price tag which placed it north of the Porsche Boxster and £9000 pricier than the 207bhp Golf GTI Cabriolet.

After internal negotiations, catalysed by negative press feedback (including in our own Golf R Cabriolet review), the R’s price has been slashed by £5600, taking it to £33,170. Those who’ve already ordered their car at the higher price – a number that’s in single figures in the UK – will have the difference refunded. With the price realigned, VW has much higher hopes of meeting its 100 annual sales target for the drop-top R.

‘We always knew the prices wasn’t where we wanted it to be’, a VW spokesman told us. ‘It’s been under negotiation since launch. We’ve finally got it at the price we wanted it’.

VW is keen to extol the virtues of its new price point, too; with a DSG gearbox, Bi-Xenon headlights and leather seats as standard, it works out cheaper than a comparatively specced Golf GTI Cabriolet before you factor in its extra power and performance, with 0-62mph taking nearly a second less at 6.4sec.

Price discounts will also be applied to the VW Golf R Cabriolet in other European markets.